SINGAPORE (The Straits Times/Asia News Network): The Red Lion parachutist who had a hard landing at the Marina Bay floating platform on National Day is stable and recovering in hospital, Defence Minister Ng Eng Hen said on Wednesday (Aug 10).

Third Warrant Officer (3WO) Jeffrey Heng suffered some injuries when he landed during the National Day Parade (NDP), but does not require surgery, Dr Ng said in a Facebook post accompanied by a smiling 3WO Heng resting on a hospital bed.

"He will need time and some rehab, but full recovery is expected," he added.

3WO Heng, the last of 10 parachutists to land, was stretchered off after his rough landing on Tuesday that saw him tumble to the ground.

The incident, which took place at about 6pm, drew concern from spectators at the Marina Bay floating platform and people watching the parade at home.

Dr Ng had said on Tuesday that 3WO Heng is in stable condition and receiving medical attention.

The Singapore Army said in a separate post that parachuting at The Float can sometimes be tricky due to strong crosswinds, gusty currents and disruptive airflow.

"Thankfully, 3WO Jeffrey applied his training and adopted the Parachute Landing Fall upon the hard landing, and thus avoided major injuries," it said.

"Thanks to our fellow Singaporeans for all their well wishes and support. We wish a speedy recovery to 3WO Jeffrey!"

3WO Heng had attempted to land at a safe distance away from his teammates, while fighting against strong crosswinds, said retired commando Chan Seck Sung, who was in the audience at the Marina Bay floating platform and witnessed 3WO Heng’s hard landing.

The 78-year-old Red Lions pioneer, who has clocked more than 1,300 jumps, told The Straits Times: “I was very shocked and I didn’t think it would happen to an experienced parachutist.

“But because of the wind conditions which were pulling him towards where his teammates stood, he tried to make a 180 degree turn to avoid crashing into them.

“The heat from the ground could also be a factor leading to the parachute’s instability.”

In response to queries, a Meteorological Service Singapore (MSS) spokesman said the wind gust recorded at MSS’ nearest station at Marina Barrage at around 6pm on Tuesday, about 1.5km away from the floating platform, was 22kmh.

The highest wind gust recorded at the station on Tuesday was 24.1kmh at 5.36pm.

Chan, who has 22 years of skydiving experience from 1966 to 1988, said 3WO Heng had tried to change his direction when he was about 20m in the air.

“Within this range, if there are crosswinds, you should not make any changes to the direction as it is too low. You should just land where the wind takes you,” he said.

“It is also best to land on grass because it is softer.”

Chan added that parachutists are trained to break their fall by rolling on the ground.

While the Red Lions land flawlessly most times given their gruelling training, there have been other accidents.

In July last year, a member of the Red Lions parachute team was carried away on a stretcher after a hard landing during a test free-fall jump in Bishan.

The skydiver, who was parachuting onto a field near Junction 8 mall, had a flag attached to him which got caught in the grass as he was about to land.

In 2017, a Red Lions skydiver had a hard landing during an NDP rehearsal and had some minor scrapes.

Chan said: “As an ex-paratrooper, I’ll say that there’s danger with every jump you take, and many factors to look out for.

“We have to be calm enough to assess the situation, and make important decisions as we are falling to ground at a high speed.” 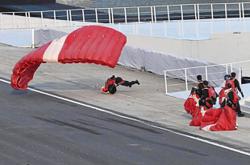 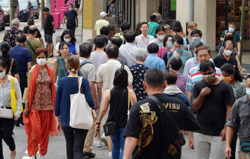