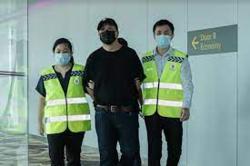 The incident happened at about 3.50pm at the carpark near Block 313 Woodlands Street 13. - SHIN MIN DAILY NEWS READER

SINGAPORE (The Straits Times/Asia News Network): An empty hearse decorated to look like a palace with lanterns and a traditional Chinese roof burst into flames next to a funeral wake in Woodlands on Tuesday (Aug 9).

The fire was quickly put out by several men who were at the wake and used buckets of water to douse the flames. Another hearse arrived later for the funeral procession.

The incident happened at about 3.50pm at the carpark near Block 313 Woodlands Street 31. Shin Min Daily News reported that the funeral was for a woman.

A Singapore Civil Defence Force (SCDF) spokesman said the fire had been extinguished prior to the arrival of firefighters.

Videos of the incident show flames consuming the decorations on the lorry.

Letchimi, a 59-year-old resident of Block 313, was startled when she saw plumes of smoke from the carpark.

"There was a lot of smoke, with the smell of burning plastic," added the housewife.

"I saw about five men using buckets of water to put out the fire.

"It happened very quickly and everything was over in about 10 minutes."

She said the wake had been held there since Aug 6 and that a smaller hearse arrived shortly after for the procession to continue.

SCDF is investigating the cause of the fire. 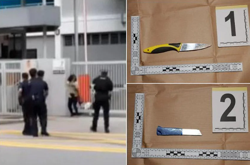