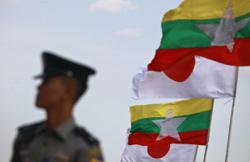 According to a local monitoring group, the junta has waged a bloody crackdown on dissent, with the violence leaving more than 2,100 civilians dead and nearly 15,000 arrested. - Reuters

"There are ample indications that since the military takeover in February 2021, crimes have been committed in Myanmar on a scale and in a manner that constitutes a widespread and systematic attack against a civilian population," the investigators said in a statement.

The junta has waged a bloody crackdown on dissent, with the violence leaving more than 2,100 civilians dead and nearly 15,000 arrested, according to a local monitoring group.

The investigation team warned in its annual report that over the 12 months to the end of June, "the scope of potential international crimes taking place in Myanmar has broadened dramatically".

The IIMM was established by the UN Human Rights Council in September 2018 to collect evidence of the most serious international crimes and prepare files for criminal prosecution.

"Perpetrators of these crimes need to know that they cannot continue to act with impunity," said IIMM chief Nicholas Koumjian.

The report said that according to the evidence collected, "Sexual and gender-based crimes, including rape and other forms of sexual violence, and crimes against children have been perpetrated by members of the security forces and armed groups."

Koumjian said the investigators were focusing in particular on crimes committed against women and children, which are "amongst the gravest international crimes, but they are also historically under-reported and under-investigated."

Children in Myanmar had been killed, tortured and arbitrarily detained, including as proxies for their parents, the report found.

They had also been subjected to sexual violence and conscripted and trained by security forces and armed groups.

The team, which has never been permitted to visit Myanmar, said it had nonetheless now collected nearly three million "information items", including interview statements, documents, photographs and geospatial imagery.

The investigators said the evidence they had collected indicated that "several armed conflicts are ongoing and intensifying on the territory of Myanmar".

They said they were drawing up case files on specific incidents of war crimes committed in the context of those armed conflicts, including intentional attacks directed at civilians, indiscriminate killings and the widespread burning of villages and towns.

Other UN experts and the IIMM itself had already warned that war crimes and crimes against humanity were being committed.

But on Tuesday, the investigators cautioned that more and more regions were becoming engulfed in the violence, and that "the nature of the potential criminality is also expanding."

They pointed to the junta's execution of four political prisoners last month, marking the first executions in the country in decades.

The IIMM also highlighted the ongoing plight of Myanmar's Muslim Rohingya minority, five years after a bloody 2017 crackdown that resulted in the displacement of nearly a million people.

Most of the around 850,000 Rohingya who were driven into camps in neighbouring Bangladesh are still there, while another 600,000 are in Myanmar's Rakhine state.

"While the Rohingya consistently express their desire for a safe and dignified return to Myanmar, this will be very difficult to achieve unless there is accountability for the atrocities committed against them, including through prosecutions of the individuals most responsible for those crimes," Koumjian said.

Last month, the International Court of Justice in The Hague threw out objections from Myanmar's military rulers and decided to hear a landmark case accusing the country of genocide against the Rohingya.