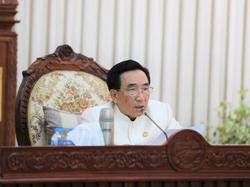 To further support the tourism industry, the President advised district authorities and local residents to offer more tours of the area.

He also suggested that farmers grow more crops and raise more livestock that could be used to feed visitors, while some food products could be sold to tourists.

Tourism activities should be carefully thought out and planned, along with environmental protection, he added.

President Thongloun instructed leading district officials to contribute more to the development of Laos, based on longstanding traditions and the diligence of local people.

Ngoy district has more than 40 officially designated tourist sites. In the first six months of this year, 1,909 tourists visited the district, including 1,704 Lao nationals and 205 people from other countries.

On Friday, the President, government officials, and Luang Prabang provincial officials visited an orchard planted on two hectares in Namnga village, Nambak district, where rambutan and grapefruit are grown.

In one year, villagers earn about 75 million kip from the sale of rambutan.

The President praised the farmers for their success in growing fruit in addition to cultivating rice. Provincial authorities instructed officials to do more in the way of agriculture and forestry and encourage more people to grow crops and raise livestock.

The farming of good quality crops and animals would enable farmers’ families to earn more income and improve their standard of living.

Agriculture officials were advised to grow more types of fruit and ensure good harvests by teaching people the best methods of cultivation and learning from the experiences of successful farmers.

This would spur further development in Nambak district which, in the first six months of this year produced crops and forest products worth 86 billion and 505 million kip respectively. Farmers have traditionally grown oranges on almost 730 hectares of land, which they sell to markets across Laos.

The President and government officials also met with Nan district officials and heard a report on the district’s development progress. 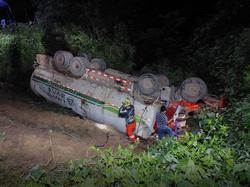