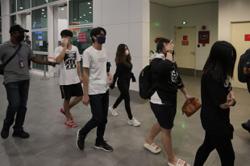 The premier made the comments when he met for talks with provincial leaders last week, according to the Paxaxon newspaper.

He instructed provincial leaders to tap the potential of the area by encouraging farmers to grow more crops, boost yields, and reduce imports.

The company is raising the cows on an area of 150 hectares and growing grass on 73 hectares of land to feed them, saying it has complied with all the conditions needed to raise cattle for commercial purposes and export.

In addition, the premier visited a US$1 million fish and shrimp farm run by the Bokeo Nayoung Company.

The company owns 99 plastic tanks which contain 20,500 fish and 500,000 shrimps. The company will sell the fish and shrimp on the domestic market, with the aim of reducing imports.

Phankham also advised local authorities to make every effort to fulfil the two national agendas on addressing economic and financial difficulties and drug trafficking. Authorities were also urged to combat human trafficking and do more to prevent tax evasion.

The prime minister highlighted the importance of the under-construction international airport located in Tonpheung district, which he said is key for Bokeo to build closer links with neighbouring countries to promote trade, investment and tourism in the province.

Bokeo province is strategically located in an economically developing area of northern Laos and has direct links to China, Thailand and Myanmar.

National Road R3 is a major route for the transport of goods and people between Laos, China, Thailand and the rest of the region.

Economists believe that when the planned expressway between Bokeo and Boten in Luang Namtha province is built, there will be an economic boom in this region.

The expressway will link Bokeo province with a station on the Laos-China railway in Boten, which it is envisaged will spur economic development in the area.

Provincial authorities were also told to further investigate and capitalise on the potential to grow more crops for export, and provide transit services for visitors and business operators, which would attract more foreign investment to Laos.