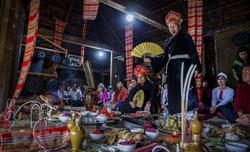 A shopkeeper waiting for customers at his mechanic shop in Hanoi amid the ongoing Covid-19 pandemic. - AFP

The Government leader stressed the significance of vaccination and urged ministries, agencies and localities, particularly the Ministry of Health, to step up communication work, as he was addressing the 17th meeting of the National Steering Committee for Covid-19 Prevention and Control.

The resurgence of Covid-19 must be prevented, said Chinh, who is also head of the committee, emphasising the three pillars in the fight – testing, quarantine, and treatment.

Given the emergence of new epidemics, the PM said it is necessary to ensure resources, the quality of preventive healthcare and medical infrastructure, and enhance grassroots health care.

Acting Minister of Health Dao Hong Lan reported at the meeting that in the first seven months of this year, the country recorded over nine million cases of Covid-19, of which the number of recoveries reached more than 8.5 million and fatalities hit 11,000.

To date, around 247 million doses of Covid-19 vaccines had been administered, putting Vietnam among the countries with the highest vaccination coverage in the world with nearly 100% of the population over 12 years fully inoculated.

Hong said 52% of the population has already received the third booster shot, while the rate of first and second doses in children aged five to 12 is even higher than in some developed countries like the US, Germany, Italy and France.

However, factors like rising cases in recent days, the sub-variants of Omicron BA.4 and BA.5 – which are highly contagious – having made their appearance in some southern localities, and the low rate of third and fourth dose coverage in some localities could be a concern, she noted.

PM Chinh requested that targeted groups should receive the third and fourth shots, and children aged from five to 12 should get the second within this month.

The leader reiterated the spirit of safely and flexibly adapting to and effectively controlling the pandemic to accelerate rapid economic recovery and sustainable development.

He asked the Ministry of Planning and Investment to give guidelines on bidding procedures relating to the procurement of medical equipment, and handle any obstacles to this work.

More than 82 trillion Vietnamese dong (US$3.5bil/RM15.6bil) has been allocated so far, benefiting 728,488 employers, 49.94 million employees and other groups affected by the pandemic, the leader noted, asking the Ministry of Labour, Invalids and Social Affairs to instruct localities to better implement such policies.

Chinh also called for greater efforts in the fight against corruption and stronger international cooperation in Covid-19 prevention and control.

At the meeting, representatives of localities suggested the Government pay more attention to policies toward health workers at the grassroots level and preventive healthcare sector.

The Ministry of Health should upgrade Covid-19 prevention and control measures at industrial parks, and production and business facilities, and continue to help localities with medical supplies, they said.