Traffic flow through the land checkpoints has steadily increased since borders between Singapore and Malaysia were reopened. - ST

SINGAPORE (The Straits Times/Asia News Network): Travellers heading to Malaysia this weekend can expect delays at the Woodlands and Tuas checkpoints, said the Immigration and Checkpoints Authority (ICA) on Wednesday (July 6).

There is a three-day-long break, with the Hari Raya Haji public holiday falling on Monday.

Departing traffic is forecast to be heavy on Friday and Saturday, while travellers arriving on Monday can also expect a longer wait.

ICA said: "At the peak of the Hari Raya Haji long weekend in 2019, travellers departing and arriving by car via the land checkpoints had to wait up to four hours before they were cleared through immigration."

It noted that traffic flow through the land checkpoints has also steadily increased since borders between Singapore and Malaysia were reopened, with traveller volume during the recent weekend of July 1 to July 3 peaking at more than 282,000 a day.

The highest volume of travellers recorded recently - 278,000 a day - was during the June holidays.

For this weekend, ICA expects departing traffic to be heavy on Friday, between 3pm and 11.59pm, and Saturday, from 6am to 10am, as well as between 4pm and 9pm.

When entering Singapore, heavy traffic can be expected on Monday, between 6pm and 11.59pm.

ICA added that those departing via the Woodlands checkpoint should factor in additional time for immigration clearance, as Jabatan Imigresen Malaysia has been upgrading arrival immigration car booths at Bangunan Sultan Iskandar since June 6.

During this period, booths that are undergoing upgrading will not be operational.

ICA is also reminding departing Singapore-registered car owners to make sure their fuel tanks are three-quarters full before reaching the checkpoints, or risk being turned away.

Reminding Singapore-registered car owners to make sure their fuel tanks at least three-quarters full, it added that travellers who fail to do so may be issued a composition fine of up to S$500 or be prosecuted in court, on top of being turned away at the checkpoints.

Travellers must also have passports which are valid, with at least six months before the expiry date, and the necessary permits. They should also refrain from bringing in prohibited items.

Those with dutiable or controlled goods should declare these to immigration officers. 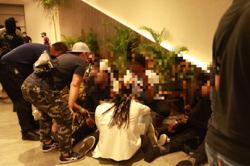