United States and Chinese foreign ministers to meet at G-20 meeting in Bali, Indonesia, this week

Motorcyclists ride past a banner for the G20 Foreign Ministerial Meeting scheduled to be held this Thursday (July 7) and Friday, outside the meeting venue in Nusa Dua on Indonesia's resort island of Bali on Tuesday, July 5, 2022.- AFP

WASHINGTON, July 5 (Reuters): US Secretary of State Antony Blinken will meet Chinese Foreign Minister Wang Yi alongside the G20 meeting of foreign ministers in Bali this week, a senior US State Department official said on Tuesday.

President Joe Biden has said he is still deciding whether to lift US tariffs on Chinese goods, as his administration faces economic headwinds from rising inflation and other strains in the wake of the COVID-19 pandemic.

The White House has said there is no deadline for Biden's decision, but Biden and Chinese President Xi Jinping are also expected to speak in coming weeks.

Foreign ministers from the Group of 20 biggest economies (G20) will meet on the Indonesian island of Bali on Thursday (July 7) and Friday ahead of November's G20 summit in November, also in Indonesia.

Blinken and Wang last met in October at a Group of 20 summit in Rome. Their meeting this week will focus in part on the war in Ukraine, according to the Washington Post, which first reported the planned talks. - Reuters 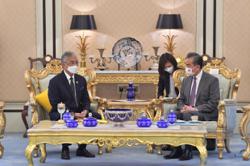