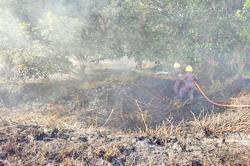 BANDAR SERI BEGAWAN, July 5 (Borneo Bulletin/ANN): The Intermediate Court has in Brunei handed a jail sentence of three years and six months to a local man for a series of thefts from places of worship.

Fifty-one-year-old Zaid Haji Edin first claimed trial to the charges, when he was first arraigned with a co-defendant, but changed his plea later.

Sitting in the Tutong District Court House, Judge Pengiran Masni Pengiran Bahar on handing sentence took into account the defendant’s age which has exempted him from a mandatory caning penalty.

Judge Pengiran Masni also gave weight to the fact that the defendant held a theft-related conviction and the current offences were committed on separate transactions.

Prosecutor Sabrina Mahmud revealed in court that on the afternoon of February 28, the defendant and his accomplice were cruising Kampong Lamunin and stopped by Kampong Menengah Mosque at 2pm.

They entered the mosque as doors were unlocked and made away with a speaker.

Sometime between February 9 and 10, the defendant and his accomplice went to Kampong Danau Mosque to get some waqaf bottled water.

The defendant’s accomplice entered the mosque and got some water while noticing that there were valuable items to steal.

The defendant was signalled to go in and they made away with a microphone and its cable. The duo’s actions were captured on CCTV camera at the mosque.

Before the two incidents, the duo struck Kampong Bukit Udal Mosque on the afternoon of May 29, 2021 where they stole an amplifier. - Borneo Bulletin/ANN