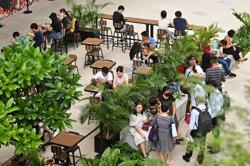 This exceeds the 11,504 cases recorded last Tuesday (June 28), which had been the highest daily number of infections since March 22, when it was over 13,000.

Case numbers on Tuesdays tend to be higher compared with the rest of the week as they reflect the spike in infections after the weekend when more people are out in various social settings.

The week-on-week infection ratio dropped to 1.34 on Tuesday, the Ministry of Health (MOH) reported in an update on its website, from 1.45 on Monday.

The rate refers to the ratio of community cases for the past week over that of the week before. A rate of more than 1 shows the number of new weekly Covid-19 cases is increasing.

MOH said there were 683 patients hospitalised, with 16 in intensive care and 77 requiring oxygen support.

There were two deaths reported.

Of the new local cases, 802 were detected through polymerase chain reaction (PCR) tests.

Another 11,446 were detected through antigen rapid tests (ART), which means they either had no symptoms or their symptoms were mild.

There were 536 new imported cases, with 37 detected through PCR tests and 499 through ART.

Health Minister Ong Ye Kung told Parliament on Tuesday that Singapore is near, if not already at, the peak of the current wave of Covid-19 infections.

He said the wave will not be as severe as the previous Omicron wave, as many people have gained stronger immunity through booster shots or recovery from infections, which will reduce transmission of the virus. - The Straits Times/ANN