The meeting between HCM City and Frankfurt officials on Tuesday (July 4). - Vietnam News/ANN

Mai said HCM City views Frankfurt as one of the key foreign localities in its external relations.

He noted as there remains much potential for bilateral cooperation, the two sides should step up partnerships in trade, investment, information technology, science, environmental protection, and tourism.

Meanwhile, Feldmann expressed his hope that in the time ahead, the two cities will further intensify exiting relations and expand cooperation to the areas matching HCM City’s interest and Frankfurt’s strength such as information technology, education, and environmental protection.

During their working trip, the Frankfurt delegation will attend the opening ceremony of the city’s representative office in HCM City and an international automotive industry exhibition.

They will also visit some German enterprises operating in the southern economic hub of Vietnam. - Vietnam News/ANN 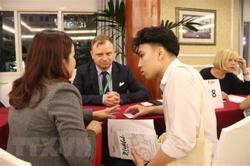