How Singapore has responded as consumer prices reach 13-year high 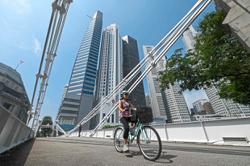 From a tighter monetary policy to longer-term electricity contracts, measures have been put in place to help Singaporeans cope. - ST

Disruptions to supply chain, among other factors, pushed May's core inflation to 3.6 per cent - the highest rate that Singapore has faced since December 2008, when it hit 4.2 per cent.

From a tighter monetary policy to longer-term electricity contracts, measures have been put in place to blunt the impact of rising prices on households and businesses here.

Last month, the Ministry of Finance (MOF) committed $1.5 billion on inflation relief for businesses and households, as global prices climbed faster than projected and are likely to stay high.

MOF said the support package will be funded from Singapore's better-than-expected fiscal position in financial year 2021, with no drawdown on the nation's reserves.

Prices are expected to rise over the coming months, despite the Monetary Authority of Singapore (MAS) tightening its monetary policy three times since last October to tame inflation.

MAS tightened its monetary policy in April in a double-barrelled move.

To allow the local dollar to strengthen against currencies of its trading partners, the central bank re-centred the midpoint of the exchange rate policy band at the prevailing level. It also slightly increased the slope or rate of currency appreciation.

It was the first time since April 2010 that both tools were used at the same time to tighten policy.

Selena Ling, chief economist and head of treasury research and strategy at OCBC Bank, said in a Bloomberg Television interview after the announcement that the measures in April were "a more aggressive move" than last October and in January.

Sophia Ng, a currency analyst at MUFG Bank, told Bloomberg that "this is the most hawkish move that MAS could undertake".

In a March statement, the Energy Market Authority said the move was to help businesses which have faced difficulties in securing fixed-price electricity contracts.

These new price plans come with a longer contract duration, ranging from six months to three years, with the electricity rate for the two-year and three-year contracts priced at 25 cents per kilowatt hour.

To help Singaporeans overcome the tide of rising food prices, the $100 worth of Community Development Council vouchers for 2022, which were announced in this year's Budget, were given out to households in May.

In an address to Parliament in May, Deputy Prime Minister Lawrence Wong, who is also Finance Minister, said that all new ComCare short- to medium-term assistance applicants between April and September 2022 will be given at least six months' worth of support from the social service offices.

Wong also announced another round of public transport vouchers worth $30 to more than 30,000 ComCare recipients and the early disbursement of the Small Business Recovery Grant, which provides up to $10,000 for small and medium-sized enterprises most affected by Covid-19 restrictions over the past year.

Those who lost their job or income during the pandemic can tap the Covid-19 Recovery Grant. The Budget has also included rebates for service and conservancy charges and utility bills for households.

In his address, Wong added that the Government is ready to help if the situation worsens and more support is needed.

Several MPs have raised questions regarding rising prices and support measures for residents in the upcoming Parliament session beginning on Monday (July 4).