HONG KONG (AFP): Most Asian markets fell again Thursday (June 30) as traders fear that hefty rate hikes to rein in soaring inflation will spark a recession, though a slight improvement in Chinese data did provide some cheer.

The rally enjoyed across the world last week appears to have given way to nervousness about the economic outlook, while the Ukraine war continues to sow uncertainty.

The surge in inflation to multi-decade highs has forced central banks to swiftly tighten pandemic-era monetary policies, dealing a hefty blow to equities, particularly tech firms who are susceptible to higher borrowing costs.

The Federal Reserve has already sharply lifted rates and is expected to announce a second successive 75-basis-point lift next month.

There had been hope that policymakers would ease off their hikes as economies show signs of slowing, but analysts say some officials are less concerned about a recession than letting prices run out of control.

Fed boss Jerome Powell this month admitted the moves could lead to a contraction, suggesting he was not averse to it.

On Wednesday, Cleveland Fed chief Loretta Mester said was keen to see the benchmark rate hit 3-3.5 per cent this year and "a little bit above four per cent next year".

"There are risks of recession," she told CNBC. "We're tightening monetary policy. My baseline forecast is for growth to be slower this year."

The threat of an extended period of elevated inflation and rate hikes has left traders weary, and markets in the red.

While Wall Street ended on a tepid note Wednesday it was unable to bounce back from the previous day's plunge.

And Asia also struggled, with Tokyo, Sydney, Seoul, Singapore, Taipei, Manila and Wellington all down.

However, Hong Kong and Shanghai edged up. That came after official figures showed a forecast-beating improvement in China's services sector thanks to the easing of painful Covid-19 restrictions in major cities including Shanghai and Beijing.

The non-manufacturing Purchasing Managers' Index surged to 54.7 points in June, the first time it has been above the 50-point growth mark since February.

The manufacturing gauge hit 50.2, which was also its first time in growth since February and provided some hope that the world's number two economy could be picking up after the pain caused by lockdowns.

"As the situation of domestic epidemic prevention and control continued to improve and a package of policies... to stabilise the economy was implemented at a quicker pace, the overall recovery of our country's economy has accelerated," National Bureau of Statistics statistician Zhao Qinghe said.

And SPI Asset Management strategist Stephen Innes added that the government and People's Bank of China could now have some room to provide growth support.

"With (consumer price) inflation low in China relative to its peers, there is plenty of scope for monetary and fiscal conditions to loosen in the second half of the year, supporting activity," he said in a note.

Crude fluctuated after dropping on Wednesday as data showed demand in the United States appeared to be softening even as the driving season gets under way, and as recession fears begin to kick in.

"The higher price environment appears to be doing its job when it comes to demand," Warren Patterson, of ING Groep NV, said.

The drop comes as Opec and other major producers including Russia prepare to meet on their output agreement, with most predicting they are unlikely to open the taps further.

"I am not expecting any surprises from the group. I would imagine it will be a fairly quick meeting," Patterson said. 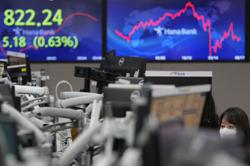