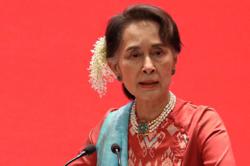 A REGIONAL envoy tasked with facilitating talks between Myanmar’s junta and its opponents will not be allowed to meet Aung San Suu Kyi during his upcoming visit.

Asean has led stalled diplomatic efforts to end the chaos unleashed by last year’s putsch, which sparked mass protests and a bloody crackdown on dissent.

Asean envoy and Cambodian Foreign Minister Prak Sokhonn is due to arrive in Myanmar for a five-day visit aimed at kick-starting dialogue between the junta and opponents to its rule.

Details have not been released over who he will meet during his visit.

“But the envoy would not be permitted to see “those who have been sentenced according to the law or those who are facing trials under the law”, said junta spokesman Zaw Min Tun.

A junta court has convicted Suu Kyi of corruption, incitement against the military, breaching Covid-19 rules and breaking a telecommunications law and sentenced the Nobel laureate, 77, to 11 years in prison.

She faces a barrage of other charges and could be jailed for more than 150 years if convicted on all counts.

Last week she was transferred from house arrest to solitary confinement in prison, a move that prompted condemnation from the United Nations.

Last year, the junta refused to grant Asean’s then special envoy permission to visit Suu Kyi, who has been detained since the coup.

The bloc later barred Min Aung Hlaing from attending a leader’s summit, a major snub from the body that has long been seen as a toothless talking shop.

Meanwhile, China’s foreign minister will travel to Myanmar this weekend for a regional meeting, in what will be Beijing’s highest-profile visit since the coup.

China is a major arms supplier and ally of the junta and has refused to label the power grab a coup.

The spokesman said he was “not sure” whether a meeting between Wang and junta chief Min Aung Hlaing would take place.

The China-backed forum gathers countries that share the Mekong river – known in China, which controls its headwaters, as the Lancang.

The foreign ministers of Cambodia, Thailand, Laos, Myanmar and Vietnam will attend the July 2-5 meeting.

With Western governments imposing sanctions following the coup and a violent crackdown on dissent, the junta has turned increasingly to allies, including China and Russia.

In April, Beijing said it would help safeguard Myanmar’s sovereignty, independence and territorial integrity “no matter how the situation changes”.

The junta is otherwise increasingly isolated on the international stage, with Cambodian leader Hun Sen the only foreign leader to visit since the putsch.

In February, Myanmar’s foreign minister was barred from attending a gathering of his Asean counterparts over a lack of progress in defusing post-coup violence.

That same month, a United Nations expert on Myanmar said China and Russia were continuing to supply the military with weapons, including fighter jets and armoured vehicles.

More than 2,000 people have been killed in the military’s crackdown on dissent since the coup, according to a local monitoring group. — Agencies