JAKARTA (The Jakarta Post/Asia News Network): The Indonesian President is continuing his journey from Poland to the Ukrainian capital Kyiv by a special train that departed early on Wednesday (June 29).

President Joko 'Jokowi' Widodo is set to meet his Ukrainian and Russian counterparts on his visits this week to Kyiv and Moscow, where he is on a peacebuilding mission and also hopes to discuss freeing up grain exports.

"From platform No 4 at Przemysl Glowny Station in Przemysl, Poland, I and my entourage will travel by train to Kyiv. We begin this peace mission with good intentions. Godspeed," Jokowi said in a tweet posted to his Twitter account (@jokowi). The trip to Kyiv is expected to take around 12 hours.

Italy's Mario Draghi said on Tuesday that President Jokowi had “ruled out” Vladimir Putin's attendance at the G20 Bali Summit in November, a statement that the Kremlin quickly rejected.

"President Widodo rules it out," Draghi told reporters at the end of the two-day G7 summit in Germany, which Jokowi attended as an invited guest.

"He was categorical, he [Putin] will not come.”

Indonesia holds the G20 presidency this year, and Western countries pressured Jokowi to exclude the Russian President from the forum’s summit after he announced in April that he had invited Putin.

On Sunday, speaking before his departure to Germany, Jokowi said he would be visiting Kyiv to meet wiith Ukrainian President Volodymyr Zelensky and seek an end to the Russia-Ukraine war, which had caused food shortages and surging commodity prices around the world.

“[The mission is to] to build peace, because the war must be stopped and [its effects] on the food supply chain must be eased,” said Jokowi. 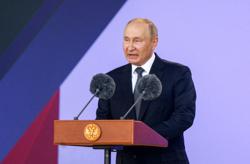