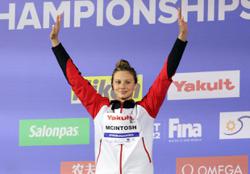 Gold medallist in the women's 800m freestyle Katie Ledecky of the US is presented with an award for the best female swimmer in the FINA World Championships at the Duna Arena, Budapest, Hungary. - Reuters

BUDAPEST, June 27, 2022 (AFP): Canadian 15-year-old Summer McIntosh headlined a crop of golden teenagers too young to drive who caught the eye at the World Swimming Championships, but a number of former prodigies showed they are still driven to win too.

It was the veterans, notably Katie Ledecky, Gregorio Paltrinieri and Nicholas Santos, not the kids, who set records.

There were extra opportunities as some elite swimmer skipped Budapest because of a competition cycle cramped by two Olympics three years apart.

As so often in swimming, more women hit early heights. McIntosh, who is still too young to drive in her native Ontario, grabbed her chance, winning two golds, a silver and a bronze.

Katie Grimes, an American 16-year-old, won a silver behind McIntosh.

Claire Curzan, at 17, won four American relay medals to add to the relay silver from Tokyo as well as an individual bronze.

"I don't even drive yet," he said, adding that even at 18, when he would be entitled to a full Romanian driver's licence, he did not think he would have the time to learn.

On the last night, Frenchman Leon Marchand, who turned 20 in May, was named male swimmer of the competition after winning two medley golds and a butterfly silver.

He shared the podium, and a slightly awkward embrace for the cameras, with the woman of the championships, Ledecky.

Ledecky was one of the veterans showing that old swimmers don't fade away as fast as they used to.

When she won the 800m freestyle at the 2012 Olympics at 15, Ledecky was a teenage sensation.

Her 800m gold on Friday was a record fifth straight world title and her 22nd world championship medal, also a record for a woman.

"It's just year after year of hard work," she said.

"I think back to London and I made it a goal not to be a one-hit wonder.

"Here we are 10 years later....and still excited for the future as well."

At 25 Ledecky might not seem old, but the stamina events are traditionally races for youngsters. She is the oldest woman's world champion in 800m and 1500m.

There were fourteen 800m finals before Ledecky began her reign. Ten were won by teens. The oldest champion was American Janet Evans who had just turned 23 when she won her second title in 1994.

The pattern was repeated on the men's side when Paltrinieri became the oldest 1500m men's world champion. It was his third world title at a distance in which he won a bronze aged 18.

Nicholas Santos, a 42-year-old Brazilian, broke his own record as oldest world championship medallist when he took silver in the 50m butterfly, a non-Olympic event.

Santos is a late developer. He did not win a major medal until he was 35.

Sarah Sjostrom, a 28-year-old Swede who took the 50m on Friday and the 50m crawl on Saturday, was a teen prodigy. She won a European title at 14 and a world title at 15.

Like Ledecky she is reaping the benefits of just keeping going with 20 world championship medals.

Sjostrom has won medals in the 100m butterfly and 200m freestyle but is focusing on sprints.

"I enjoy the training for the 50s, and I can also keep racing at a lot of events, I feel I'm physically still strong enough to do that," she said.

The Lithuanian won Olympic gold in 2012 aged 15. She added a first world title the following year. Both were in the 100m breaststroke.

It took her nine years to win her third gold, in the breaststroke sprint on Saturday, at the age of 25.

She suggested the water had not always been calm.

"I'm grateful for every step taken in my life, the bad ones and the good ones as well," she said. "I'm happy to be here, finally enjoying swimming." 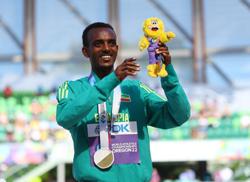