The 48-year-old driver was seen making a call in his seat, before he got out of his car and lay on the walkway. - The Straits Times/ANN

SINGAPORE, June 27 (The Straits Times/ANN): The driver of a sport utility vehicle steered so far off Irrawaddy road in Novena that he ended up in a front-first dive onto the walkway leading into Royal Square Novena on Sunday morning (June 26).

The vehicle came to rest in an awkward position, with the front tilted downwards and the rear wheels on a raised platform about 50 cm high near the exit for Novena MRT station.

The impact damaged a light and some foliage, attracting the attention of two security guards.

The 48-year-old driver was seen making a call in his seat, before he got out of his car and lay down on the walkway.

The Singapore Civil Defence Force said he was taken to Tan Tock Seng Hospital after they received a call about the incident at 9.50am, without elaborating on his condition.

The police is investigating the incident. - The Straits Times/ANN 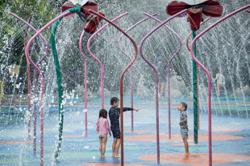