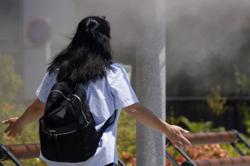 People gather at Odaiba Marine Park in Tokyo during evening hour on June 24, 2022. The heatwave the country is experiencing is expected to persist throughout the summer.- AFP

TOKYO, June 25 (Reuters): A city in eastern Japan logged the country's highest temperature for a June day on Saturday, breaking above 40 Celsius, the weather bureau said.

The heat-wave, which the Japan Meteorological Agency (JMA) expects to persist throughout the summer, came as the government called on households and businesses to save electricity to avoid possible power crunch until September.

A weather station recorded a temperature of 40.2C (104.36F) on Saturday afternoon, in Isesaki, a city 85 kilometres (53 miles) northwest of Tokyo, according to JMA.

"A strong anticyclone from the Pacific, coupled with a cloudless weather, brought the heat," a JMA official said.

Another weather station in central Tokyo logged 35.4C earlier in the day, marking the earliest arrival since records began in 1875 of an above-35C day in the capital, considered extreme heat in Japan.

On Saturday, JMA and the environment ministry issued a heat stroke alert in six of the country's 47 prefectures, recommending people to remain indoors and use air conditioners.

In its latest three-month weather forecast released this week, JMA said this summer will be hotter than regular years in northern, eastern and western Japan, due to factors such as the global warming and La Nina.

The forecast adds a concern for the country, which faces tighter energy supply due to the slow restart of nuclear power, thermal plant shutdowns and geopolitical risks heightened after Russia's invasion of Ukraine. - Reuters 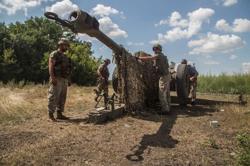