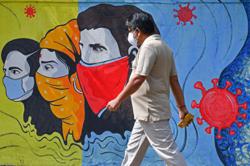 People ride they skateboards as they take off for an event parade celebrating Go Skateboarding Day in Manila on June 18, 2022. The Philippine has seen increasing number of daily Covid-19 cases over the last two weeks. - AFP

MANILA, June 19 (Philippines Daily Inquirer/ANN): The Philippines Department of Health (DOH) has warned of an increasing number of Covid-19 cases and that the country could see as many as 800 to 1,200 cases per day by the end of June, but there is still no indication of another surge.

“So, we need to prevent that from happening because these projections are not cast in stone. These are just used for us to prepare,” Health Undersecretary Maria Rosario Vergeire said at the Laging Handa briefing.

Vergeire said the Philippines had recorded a national daily average of 350 Covid-19 cases, a 50 per cent to 60 per cent increase from the previous week.

She added that the daily cases in Metro Manila had gone up to 170 from the previous 102.

“The number of cases continues to rise albeit relatively slowly, but we all need to be cautious,” Vergeire said.

The independent pandemic monitor OCTA Research maintained its forecast of a “weak surge” in the coming days in Metro Manila as the seven-day average of daily Covid19 infections in the National Capital Region (NCR) jumped by 71 and new cases accounted for about half of the national total.

According to its latest data, the one-week growth rate of new cases rose to 176 on Friday from 103 the previous week, the highest recorded since February when the country was just recovering from the Omicron surge.

This translates to an average daily attack rate (Adar) of 1.24, or more than one Covid-19 case per 100,000 population, OCTA said. The reproduction number was 1.8 on June 1, or almost two individuals getting the virus from one infected person.

“These numbers we are seeing have been in line with our projections: a weak surge and no escalation of alert levels because we expect our health-care system will be able to manage the relatively low number of hospitalizations,” OCTA said.

The DOH and OCTA agree that the health-care utilization, a key metric in determining alert level classification, was manageable.

Vergeire pointed out that the national hospitalization rate has remained below 20 per cent.

Reacting to OCTA’s forecast, Vergeire said, “Let’s not call it a surge.”

“First of all, when you talk about the surge, it’s a sudden increase in the number of cases. When we look at it, yes, it’s rising but it’s not, rising that fast, the additional cases are not that many,” she said.

Metro Manila will remain under the most relaxed pandemic restriction, alert level 1, until June 30.

This could be elevated to the alert level 2 if the Adar “would be more than six per 100,000 of the population” and if total daily cases reach 800, Vergeire said.

The country recorded 539 new Covid-19 cases on Friday, the highest number of daily cases since 690 were registered on April 3 this year.

Iloilo Rep. Janet Garin, a former health secretary, on Saturday said a sure way to curb the increase in the number of cases was to intensify the vaccination drive and to now allow a second booster shot for members of the public willing to get it.

“Trials have established the benefits of receiving two boosters,” Garin said. “Those who would like complete protection should be allowed to do so and be given the option.”

She noted the low turnout of eligible individuals who had availed of the second booster shot.

According to the DOH, only about 580,000 eligible Filipinos have availed of the second Covid-19 booster dose as of Wednesday.

Garin is concerned about the emergence of the Delta and Omicron variants and their subvariants, which, she said, had changed the definition of a “fully immunized” person.

“Waning protection and inadequate protection from the primary series are two reasons we have breakthrough infections,” Garin said. Breakthrough cases refer to those who get infected despite being vaccinated.

A “fully immunized” individual would now refer to a person who had received the primary series (two doses) plus a third dose, or the first booster shot, she said, noting that the change in status was “based on the behavior of the virus and its impact on vaccination.” Low awareness

She said there should be more effort put on informing people about the benefits of booster shots.

“Few are getting the boosters because they are not aware that if one does not get the booster dose, he or she is not getting the complete protection,” Garin said.

Also, even if the vaccine has a waning effect, it still provides benefits, such as preventing deaths, reducing the severity of the infection, and milder breakthrough cases, she added.

As of June 4, government data show that about 70.3 million Filipinos have been fully vaccinated. This is equivalent to 64 percent of the country’s estimated 110 million population. About 14.7 million of them, or 13 percent of Filipinos, have received a booster shot.

The Philippines has received over 245 million vaccine doses as of June 2, according to the National Task Force against Covid-19. - Philippines Daily Inquirer/ANN 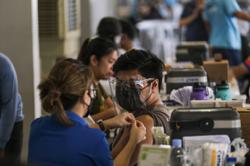 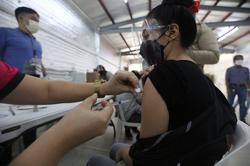