Customs officers inspect a China-Laos cargo train before its departure in Chongqing, May 21, 2022. - Xinhua

BEIJING (Xinhua): The China-Laos Railway, half a year into its operation, has delivered more than 4 million tonnes of freight as of Thursday (June 2), China's railway operator said.

The transport volume of cross-border cargo came in at 647,000 tonnes during the period, according to the China State Railway Group Co, Ltd.

Since December 2021, 21 Chinese regions have designated cross-border trains for freight transport along the railway, with goods including fertilizers, daily necessities, electronics and fruits.

As a landmark project under the Belt and Road Initiative, the 1,035-km China-Laos Railway connects China's Kunming with the Laotian capital Vientiane. 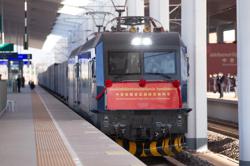