Twenty-six people were missing after a ferry ran out of fuel and sank in bad weather off the coast of Indonesia, officials said.

The country’s search and rescue agency said the vessel was carrying 43 people when it capsized on Thursday in the Makassar Strait, the sea separating the islands of Sulawesi and Borneo.

News of the accident only reached officials yesterday, said the local head of search and rescue Djuanidi.

“Seventeen people have been rescued alive by two tugboats that were passing by. We have deployed a rescue team to search for the missing passengers,” he said.

A group of 40 rescuers were at sea searching for survivors, Djuanidi added.

Marine accidents are common in Indonesia, an archipelago of around 17,000 islands where safety standards are often lax.

Last week, a ferry carrying more than 800 people ran aground in shallow waters off East Nusa Tenggara province and remained stuck for two days before being dislodged. No one was hurt.

In 2018, more than 150 people drowned when a ferry sank in one of the world’s deepest lakes on Sumatra island. — AFP 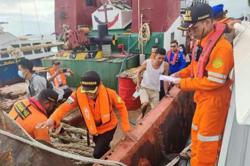