Scammers get student to fake kidnapping for ransom SINGAPORE (The Straits Times/Asia News Network): When Peter failed to raise the sum, he agreed out of fear to cooperate with the scammers' scheme to fake his kidnapping.

But Peter's guardian in Singapore, Jenny (not her real name), alerted the police on May 14 when he did not return home the night before.

To her relief, the teen returned safely and no money was transferred to scammers.

Speaking to the media over Zoom on Thursday (May 26), Peter, a secondary school student here, said the "ICA officers" had connected him with scammers impersonating police officers from China.

"They accused me of being part of a scam syndicate and said I had earned 260,000 yuan in profits from cheating victims.

"I was really scared but I believed then that they were real police officers," he said.

To obtain the funds, Peter lied to his mother in China about needing money for tuition and a new computer, but she refused to give him.

Desperate to clear his name, he agreed to his "kidnapping".

But he went to Alexandra Hospital to meet someone who took his phone and gave him keys to an apartment.

He then followed the scammers' instructions to go to a home in Sembawang.

"I was alone and they told me to apply tomato sauce on my body to make it look like I was injured," said Peter.

He then took videos of himself and sent them to the scammers.

Without his knowledge, they sent the videos to Jenny and his parents on the morning of May 14 and demanded a ransom of 5 million yuan for his release.

The scammers also sent threats to Jenny, saying they would "push him down the stairs" if she did not pay them by a certain time, but she told them that she needed time to raise the money.

The scammers also made Peter write a scripted farewell letter where he wrote that he would be sold to human traffickers if the ransom was not paid.

When the scammers did not receive any ransom by May 16, they told Peter to leave. Jenny said he reached home safely at around 4.20pm.

Peter said he did suspect that he had been scammed, but had no evidence to support his hunch and was afraid of getting into trouble for telling others about what he was going through.

"I've learnt a valuable lesson from this... I will beware of strange calls from now and ask my family members for help if I'm in trouble" he said.

"We were aware that they faced mounting stress and that the scammers were preying on their fears. We were fortunate to have gained their trust and achieved a positive outcome," said ASP Gan, who is a senior investigation officer of the police's anti-scam command.

The police reiterated on Thursday that foreign law enforcement agencies have no jurisdiction to conduct operations in Singapore without the approval of the Singapore Government.

The police advised the public to ignore calls from numbers with the "+" prefix that originate from overseas.

Foreigners receiving calls from people claiming to be from the police in their home countries can verify with their embassy or high commission. 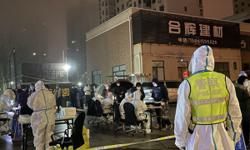