President-elect Ferdinand “Bongbong” Marcos Jr (pic) says that there are other ways to address the rising cost of fuel aside from merely suspending the excise tax on oil products.

In a press briefing streamed on his Facebook page yesterday, Marcos said they were looking at possibly supporting hard-hit areas instead of fully suspending excise taxes, as the government needed funds for its projects.

“I think there are other ways to handle the increase and the disturbances that we are having in terms of the petroleum products that we are importing.

“We can support those areas hit by rising oil prices – number one, there is transport. And this is important because transport is going to be critical in the resurgence of the economy,” he said.

“So in terms of oil excise tax, I think we still have to look at that very well. If there is a commensurate return to somehow deferring the collection of the excise tax, of course the government needs the money,” he added.

Several groups have called for the suspension of the oil excise taxes after fuel prices kept increasing due to several factors, including the ongoing Russia-Ukraine conflict.

Pump prices for regular unleaded gasoline are now at between 74 pesos and 80 pesos (RM6.20 and RM6.70) per litre, while diesel is around the same price.On April 25, progressive group Bagong Alyansang Makabayan (New Patriotic Alliance) asked presidential candidates to unite towards the call to suspend the excise tax, after a fresh round of oil price hikes.

But the administration remained firm that social aid would be provided to hard-hit families instead of the tax suspension.

Marcos, however, stressed that if there was a study showing that removing excise taxes on fuel products would be beneficial, then he may push for it – something that his economic team will be tackling in the first week of the new administration.

“But if you can really see... what’s the matter, when you say let’s remove the excise tax or reduce the excise tax, is it really worth it to lose the government’s funds because it would be better for the economic effect and we can recover?

“So, we have to study that. It’s still a cost-benefit analysis and it’s not simple but that’s what we will have to do. Of course, that will be one of the areas under intense study in the first few weeks,” he added. — Philippine Daily Inquirer/ANN 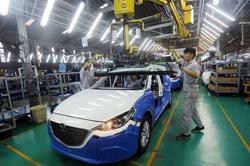