Ferdinand Marcos Jr was proclaimed the next Philippine president after a landslide win that rights groups and religious leaders fear could weaken the corruption-prone country’s democracy.

Marcos, who formally takes office next month, secured more than 31.6 million votes, or 58.8% of the total, according to a final tally released by parliament.

He was the first presidential candidate to win an outright majority since his dictator father, who presided over widespread graft and human rights abuses, was ousted by a popular revolt in 1986.

A joint session of the House of Representatives and Senate formally ratified the results and proclaimed Marcos the Philippines’ 17th president. He will be inaugurated on June 30.

Speaking after the ceremony, Marcos said he was “humbled” by his success at the ballot box and vowed to “always strive to perfection”.

Marcos’s victory followed relentless online whitewashing of his family’s past, and alliances with rival political dynasties that have the means to influence voters in their regions.

His liberal rival Leni Robredo finished well behind in second place with just over 15 million votes.

Marcos’s running mate Sara Duterte, the daughter of the outgoing President Rodrigo Duterte, was proclaimed winner of the vice-presidential race.

Wearing a traditional formal shirt, Marcos greeted Sara Duterte with a hug as she arrived inside the parliament building.

Former first lady Imelda Marcos, 92, who has been the driving force behind the family’s comeback from exile to the peak of power, was pushed in a wheelchair into the chamber where she held a seat as recently as 2019.

Joining her was the new first lady, Louise Araneta-Marcos, along with other relatives and supporters.

“We’re very, very grateful for a second chance,” Imee Marcos, an elected senator and sister of the president-elect, told reporters.

Hours earlier and several kilometres away, hundreds of riot police clashed with protesters opposing the proclamations, outside the Commission on Human Rights.

Water cannon was sprayed on the crowd of activists. Leftist groups reported at least 10 people wounded.

“Is the violent dispersal today a prelude of things to come under a Marcos-Duterte administration – where exercising our basic rights and freedoms are met with brazen State violence?” Cristina Palabay, secretary general of the Karapatan human rights group, asked in a statement. — AFP 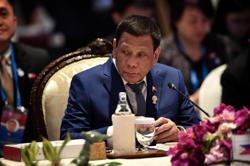