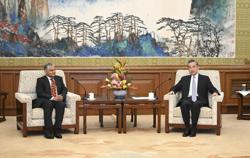 SYDNEY (AFP): Australia's economy minister called on China Wednesday (May 25) to drop punishing trade tariffs if it wants to thaw frozen relations, after Beijing sent a message signalling it is ready to improve ties.

China -- Australia's biggest trading partner -- imposed tariffs and disrupted more than a dozen key industries, including wine, barley and coal, as relations deteriorated sharply in the past two years.

Canberra had irked Beijing by calling for an independent probe into the origins of the coronavirus pandemic and by banning telecoms giant Huawei from building Australia's 5G network.

Treasurer Jim Chalmers said Australia felt the pain of the Chinese trade squeeze, calling for the measures to be lifted "as soon as possible".

"They are damaging our economy. They are making life harder for some of our employers and workers here in Australia," he told public broadcaster ABC.

"Obviously, we would like to see those measures lifted. That would be a really great start, when it comes to how we manage what is a really complex relationship, a relationship that has become more complex over time."

Li's letter said China was ready to work with Australia to "review the past, look into the future" and promote a "comprehensive strategetic partnership", the state-run Xinhua news agency said Monday.

The Chinese message paves the way for dialogue but the outlook is hard to predict, said Elena Collinson, a researcher at the University of Technology Sydney's Australia-China Relations Institute.

"Certainly a reset is not in the offing," she said.

While Australia is demanding an end to Chinese economic punishment, Canberra's "tough-on-China" stance may make it harder to agree to concessions Beijing is likely to request, Collinson said.

Australia is worried about Beijing's growing influence in the Pacific region, including a recent security pact between China and the Solomon Islands.

A leaked draft of the agreement, which has not been made public, includes a section that would allow Chinese naval deployments to the Solomons -- less than 2,000km (1,200 miles) from Australia.

Announcing the trip, the Chinese foreign ministry said it would be "beneficial to the peace, stability and prosperity of the Asia-Pacific region".

Australia's prime minister attended a "Quad" summit in Tokyo on Tuesday with the US, Indian and Japanese leaders, who jointly warned against attempts to "change the status quo by force" in the Asia-Pacific region.

The Solomon Islands government severed ties with Taiwan in September 2019 in favour of diplomatic relations with China, a switch that unlocked investment but stoked internal rivalries.