Prayut said on Monday that the economy expanded 2.2 per cent in the first four months of 2022 from a year earlier as stimulus campaigns boosted public spending by 3.9 per cent.

The “Khon La Khrueng” (Let’s Go Halves) and “Rao Tiew Duay Kan” (We Travel Together) schemes had driven public spending and domestic tourism, while exports were up 12 per cent, the PM added.

Meanwhile Thailand had welcomed 1.02 million visitors from May 1-18 after Test&Go restrictions were lifted.

Asked about Chadchart Sittipunt winning the Bangkok governor election with a landslide 1.3 million votes, Prayut said the government was happy with Chadchart and will support him in his work for Bangkok people.

“I don’t believe the election result reflects people’s rating of me or the government. It’s a democratic process like any other election,” said Prayut.

“The party that supports me [Palang Pracharath] did not field a candidate for governor anyway.”

Prayut also put a brave face on the government party’s dismal showing in the Bangkok council election, which saw only two of 50 seats go to Palang Pracharath.

“As for the two Palang Pracharath candidates who won city council seats, I believe they can help make things better,” he said.

The results left the capital in the hands of progressive politicians ahead of a general election expected late this year or early next year.

Prayut was speaking after attending a meeting for the Indo-Pacific Economic Framework (IPEF) at Government House. 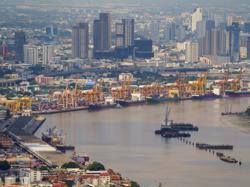