SINGAPORE, May 23 (The Straits Times/ANN): A diagnosed paedophile who sexually assaulted his two grand-nieces less than three years after serving a lengthy prison term for raping his stepdaughter, was sentenced to the maximum 20 years' preventive detention on Monday (May 23).

Under preventive detention, recalcitrant offenders are put behind bars for seven to 20 years for the protection of the public.

The High Court agreed with prosecutors that the 60-year-old man had to be removed from society for the maximum duration.

"It is clear to me that the accused represents a real risk to vulnerable prepubescent girls," said Justice Dedar Singh Gill.

"These girls need to be protected. Three young girls have suffered. No other female should have to undergo the same experience at the hands of the accused."

The judge said the man's denial of his paedophilic disorder was of grave concern, as the first step in dealing with any disorder is to recognise it.

A pre-sentencing report assessed that the man's risk of sexual reoffending was high.

The report stated: "Despite a long period of incarceration, the ability to understand that his behaviours were wrong, multiple warnings from a family member, and possible detection, he continued to sexually abuse his victims, which indicated disregard for the consequences."

The man cannot be named owing to a gag order to protect the identities of the two victims, who are now 15 and 17 years old.

In 2001, he was sentenced to 19 years' jail and 24 strokes of the cane for statutory rape of his stepdaughter.

The rapes began in 1996, when the girl was between six and seven years old, and continued until she was 12.

After he was released from prison in 2013, he moved in with his older sister and her husband, who lived with their three grandchildren and the victims' mother.

Deputy Public Prosecutor Jaime Pang said in sentencing arguments: "Not only did the accused exploit the trust that the victims reposed in him, he also betrayed the trust of his sister and her husband, who had taken him into their home after his release from prison."

In 2015, the man molested the older girl, when she was between 10 and 11, by touching her inappropriately over her clothes.

The following year, he went into her bedroom at night and sexually violated her.

The older girl moved out of the flat with her mother in 2016.

The man then turned his attention to the younger girl.

On two occasions in 2017, when she was between nine and 10, he asked her to sit on his lap and then violated her.

The offences came to light in July 2019, after the girls' older brother called the police to report that his younger sister had become uncontactable.

She was found by police several hours later and, when questioned, revealed that she did not want to return home as she had been sexually abused by her grand-uncle.

The man was arrested later that day.

Last year, the man pleaded guilty to two counts of aggravated sexual assault by penetration and one count of outraging the modesty of a person under the age of 14.

Another three similar charges were considered during sentencing. - The Straits Times/ANN 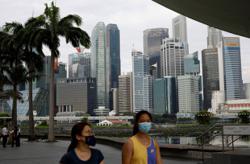