JAKARTA (The Jakarta Post/Asia News Network):Married couples of mixed Indonesian and foreign citizenship have welcomed a planned regulatory revision that could buy their children some time to consider which nationality to retain to comply with the country’s prohibition of indefinite dual citizenship.

Law and Human Rights Minister Yasonna Laoly said last week that the government was revising Government Regulation (PP) No. 2/2007 on mechanisms to obtain Indonesian citizenship and expected the changes to offer “solutions to problems faced by children of mixed marriages”, kompas.com reported.

Yasonna also noted that regulators were discussing the potential extension of the deadline for such children’s citizenship decisions.

Indonesia does not recognise dual citizenship, except for in the case of children of one Indonesian and one non-Indonesian parent, who may hold their dual citizenship until the age of 18, after which they have three years to register their choice of nationality, according to the 2006 Citizenship Law.

The 2007 regulation in question, meanwhile, details the documents needed to register one’s choice of Indonesian citizenship by age 21 at the latest.

Indonesian Mixed-Marriage Society (Perca) chairwoman Analia Trisna said the group had been pushing the government to address the issue of children of mixed marriages, who, she said, were made to choose their nationality too soon.

“We hope that there is a solution to this situation, as 21 years old is still very young, as some children are still finishing up their education abroad,” Analia told The Jakarta Post on Saturday (May 21), adding that the group welcomed the planned revision to the regulation.

“We’re not just asking for the government’s help; we also want to contribute to the government. Our children are our resources [to help the country],” she said.

Yasonna said in Bali on Wednesday that the government was still gathering opinions on the revision from stakeholders, including members of the Indonesian diaspora.

“There are some suggestions that the [nationality choice] deadline should be increased to 30 years old so that those who are studying abroad do not need to return [to Indonesia]. At the age of 21, they have yet to finish their studies," Yasona said, as quoted by kompas.com.

"That's the request. We need to discuss it."

It remains unclear how and to what degree the government will be able to revise the regulation, as it is bound by the terms of the overarching 2006 Citizenship Law.

The ministry’s director general for legal administration, Cahyo Rahadian Muzhar, was not immediately available for comment.

Yasonna said that at the moment, the most the ministry could do was give children of mixed marriages a multiple-entry visa that lasted for five years while they decided which nationality to keep. 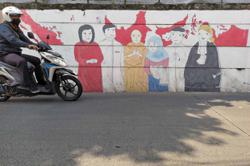