JAKARTA, May 23 (Reuters): Indonesia's government reported on Monday more than 20,000 livestock had been infected by foot and mouth disease in 16 provinces, as lawmakers urged authorities to find the source of the virus and ramp up efforts to prevent further spread.

The infections have spread since the Agriculture Ministry reported cases in two province less than two weeks ago. Local media reported around 1,600 animals were infected in East Java and 1,200 in Aceh province at the time.

Agriculture Minister Syahrul Yasin Limpo told a parliamentary hearing on Monday 20,723 head of livestock had been infected in 16 provinces as of last week. He said these provinces had a total livestock population of around 13.8 million.

Lawmakers at the hearing urged the government to investigate where the infection originated from, slamming authorities for being "careless" in letting the virus spread across the country for the first time since around late 1980s.

The infections have spread at a time when Indonesia was already facing rising prices of meat and ahead of Eid al-Adha, one of the most important Islamic holidays, where Muslims traditionally slaughter animals and share the meat with the poor.

Limpo said the government was importing vaccines, but preferred to use Indonesian-developed doses that should be ready within a few months.

Authorities in affected areas are also setting up barriers between city borders to prevent the spread into other regions, Limpo said.

"We are being fully supported by the police," he said regarding the border controls.

Another lawmaker Dedi Mulyadi criticised the lack of sanitation control at some local animal markets. - Reuters 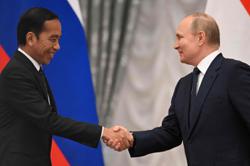