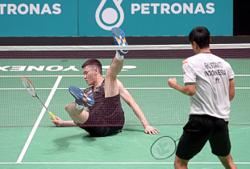 Taiwan's Tai Tzu-ying poses with her medal and trophy after beating China's Chen Yufei to win their women's singles final match at the 2022 Thailand Open badminton tournament in Bangkok on Sunday, May 22, 2022. - AFP

The Taiwanese 27-year-old, who lost last year's Thailand Open final to Spain's Carolina Marin, got off to a fast start against the Chinese world number four and eventually sealed the win 21-15, 17-21, 21-12.

She sped into a nine-point lead in the first game but Chen, who was part of a Chinese team narrowly defeated by South Korea in last week's Uber Cup in Bangkok, clawed her way back to take the second game and force a decider.

Tai then quickly opened up a seven-point lead in the final game and rode the momentum to claim victory.

In the men's final, match favourite and world number six Lee Zii Jia survived an unexpected scare at the hands of Chinese rookie Li Shifeng, ranked 49th in the world.

The 24-year-old Malaysian showed aggression and high energy in the opener but the burden of expectations got the better of him as Li seized the first game.

Lee -- who won the Badminton Asia Championships in Manila this month -- steadied himself in the second and raced to a six-point lead at the break before equalising the score.

In the last game, a nervous Lee overplayed some shots while Li proved lethal in attack and carved out a seven-point advantage at the interval.

Power smashes and fancy footwork helped Lee narrow the gap, levelling the score at 19 all.

But a sloppy long shot gave Li match point, which Lee managed to save.

The encounter came to a climax as Lee then squandered his own match point, before coming up trumps on his second opportunity to secure the final game 23-21.

After hitting the winning shot, Lee sank to his knees in elation, before throwing his shirt and racquet into the crowd. - AFP 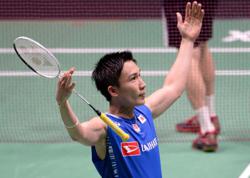