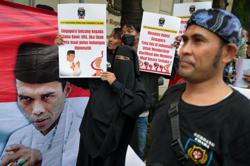 Supporters of Indonesian preacher Abdul Somad Batubara staged protests in Jakarta and Medan against Singapore’s recent move to deny him entry over his history of extremist teachings.

In Medan, about 250 of the preacher’s supporters first gathered at Medan Grand Mosque on Friday before marching to the Forum Nine office building, where Singapore’s Consulate-General is located.

Somad was born in North Sumatra and lives in Pekanbaru, the capital of neighbouring Riau province, where he spends much of his time when not travelling.

In a 45-second video posted on Twitter, a protester could be seen speaking through a loudspeaker and pointed out Somad’s popularity beyond Indonesia.

“The situation was safe,” he said.

He added that representatives of the protesters, along with cleric Hasan Matsum, chief of the Medan chapter of the Indonesia Ulema Council, managed to meet the Singapore Consul-General in Medan.

In Jakarta, a crowd of around 50 men and women, with some holding banners, held a protest in front of the Singapore Embassy amid heavy rain.

One of their banners read: “Stop Islamophobia. Singapore apologise within 24 hours to the Indonesian people. Don’t harass our ulama.”

Singapore denied entry to Somad and six of his travel companions soon after they arrived from Batam on Monday.

On his Instagram account, the preacher posted a photo and a short clip of himself at his holding area in Tanah Merah Ferry Terminal.

In its response to the Indonesian Embassy in Singapore’s query on the matter, Singapore’s Immigration and Checkpoints Authority said the reason for the refusal was due to “being ineligible for the issue of a pass under current immigration policies”.

A spokesperson at Singapore’s Home Affairs Ministry said on Tuesday that “Somad has been known to preach extremist and segregationist teachings, which are unacceptable in Singapore’s multiracial and multireligious society”.

Although he is one of Indonesia’s most widely followed preachers, Somad has also been criticised by Indonesians, including mainstream Muslim leaders, for comments he has made denigrating other faiths.

Several of them have also welcomed Singapore’s decision to bar him from entering the republic.

Indonesia’s Foreign Ministry spokesman said on Thursday that Indonesia acknowledges the sovereignty of every country to implement its immigration rules and exercise its rights to accept or deny entry to foreigners. — The Straits Times/ANN 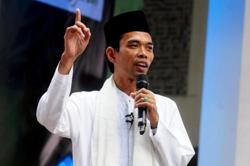