The project at STMicroelectronics' TechnoPark in Ang Mo Kio will be operational in 2025. - SCREENGRAB FROM GOOGLE MAPS

SINGAPORE (The Straits Times/Asia News Network): The Republic will get its largest district cooling system at an industrial development in Ang Mo Kio by 2025, as uptake of the energy-saving technology speeds up on the tropical island.

The latest project comes after announcements were made in the past month to install or expand district cooling networks around Singapore, namely Kent Ridge, Jurong Lake District, Tampines and Marina Bay.

Singapore is looking to cut electricity usage and carbon emissions with district cooling networks, which allow clusters of buildings to share and optimise the load of cooling through centralised chiller plants.

On Wednesday (May 18), utilities company SP Group and global semiconductor manufacturer STMicroelectronics said the project at STMicroelectronics' TechnoPark in Ang Mo Kio will be operational in 2025, with the firm investing US$370 million (S$514 million) over 20 years.

The system is expected to achieve 20 per cent savings in electricity consumption by improving chiller system efficiency annually, with the potential to reduce carbon emissions of up to 120,000 tonnes per year, the equivalent to taking 109,090 cars off the road, they added.

Along with lower energy consumption, the estimated decarbonisation stems from repurposing more than 4,000sq m set aside for chiller plants, which will be free once the district cooling system becomes operational.

This will provide space for solar energy and perfluorocarbons (PFC) abatement equipment - systems that reduce PFC emissions produced from manufacturing semiconductors that are harmful for the environment.

Under an agreement signed between the companies on Wednesday, SP will design, build and operate the system, pumping chilled water to meet both the manufacturing and spatial cooling needs of the industrial development in Ang Mo Kio.

Hailing district cooling as key to empowering a low-carbon future for cities, townships and industrial parks, Stanley Huang, group chief executive of SP, said the solution was customised to help energy-intensive manufacturing developments such as STMicroelectronics' TechnoPark reduce their energy consumption and carbon footprint in line with their sustainability strategies.

Rajita D'Souza, president of human resources and corporate social responsibility at STMicroelectronics, said: "The cooling system in Singapore will be STMicroelectronics' first deployment of district cooling at a manufacturing facility globally and is a strong statement of our commitment to our target to become carbon-neutral globally by 2027."

The adoption of district cooling at the company's single largest wafer-fabrication site in Ang Mo Kio in terms of volume will eliminate the equivalent to 30 per cent of carbon emissions in Singapore in 2021, making it a key enabler for the facility and the company to achieve its sustainability goals, she added. 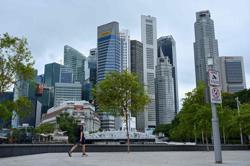