The Ministry of National Defence has issued a new Defence White Paper – the third such plan to have been introduced since 2000 – that details Cambodia’s policy and strategy to modernise the kingdom’s armed forces.

The plan illustrates the government’s long-term strategy in the defence and security sectors and its relationship with civil sectors, with the latest edition covering hot-button topics of late, including the modernisation of the kingdom’s defence force.

The ministry said the paper demonstrated Cambodia’s plan to upgrade and reform the Royal Cambodian Armed Forces (RCAF), while noting that such development concerned multiple facets of its operations, including the air force and heavy weaponry rescue efforts.

In the preface of the 80-page White Paper released on May 12, Prime Minister Hun Sen said: “Building our defence foundation is the top priority, which the RCAF must fulfil in order to protect the sovereignty and territorial integrity of Cambodia.

This year’s Defence White Paper is the third such policy document, with previous papers published in 2000 and 2006.

It outlined the government’s vision in the next decade, with a focus on capacity development, modernisation of the armed forces and enhancement of international cooperation.

It said the capacity of the armed forces “should not be forced to remain in a deteriorated condition”.

“This modernisation does not threaten any particular nation in the region, while Cambodia does not permit any foreign military base on its sovereign territory,” the White Paper said.

Kin Phea, director of the Royal Academy of Cambodia’s International Relations Institute, said that currently, “nearly all” countries are strengthening their military due to multiple threats posed by regional and international issues.

This required reform and modernisation in weaponry, armed forces and assigning of military duties, he said, and was to be done in conjunction with the betterment of other factors that strengthen a nation, such as human resources, economy, trade and foreign policy. — The Phnom Penh Post/ANN 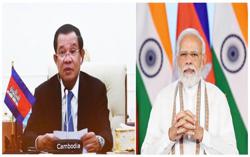