HANOI, May 16 (Reuters): Vietnam's state-owned coal miner Vinacomin will boost domestic production to meet rising demand for the fossil fuel amid surging global prices, the Ministry of Industry and Trade has announced.

The Southeast Asian country, a regional manufacturing powerhouse, earlier this year warned of electricity shortages due to tight coal supplies.

"Domestic demand for coal is at high levels, especially coal for power generation during the hot months of summer," Vinacomin Chief Executive Officer Dang Thanh Hai said in a statement.

Vinacomin, formally known as Vietnam National Coal-Mineral Industries Corp, produced 14.9 million tonnes of coal in the first four months of this year, up 10% from a year earlier, according to the statement. This accounted for 90% of the country's total coal output in the period.

The company targets producing 4 million tonnes in May, the ministry added.

Vietnam turned from a net coal exporter to a net importer nearly a decade ago and has been increasingly reliant on imported supplies for its power generation. Indonesia and Australia have been its key suppliers.

Its coal imports in the January-April period fell 24.5% year-on-year to 9.4 million tonnes, but the value of those imports more than doubled to $2.39 billion due to rising prices, according to the government's customs data. 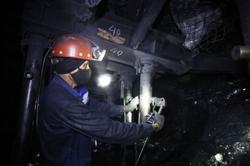