Robredo tells supporters: I hope there is no regret in our hearts and souls

NAGA CITY (Philippine Daily Inquirer/Asia News Network): Presidential candidate Vice President Leni Robredo expressed hope her supporters do not regret joining and offering anything they can during the elections.

“I hope that there is no regret in our hearts and souls,” Robredo said in her native Bicol, addressing the attendees during the solidarity and thanksgiving mass at the Naga Metropolitan Cathedral in this city on Tuesday (May 10) night.

“We know that we did everything. All the diligence, all the sacrifices, not just mine, but especially yours. I saw what you offered for the elections. I hope that what we have offered, we can carry on with us for the bigger fight that is to come for all of us,” she added.

The mass, celebrated by Archbishop Rolando Octavus Tirona Tria and organised by Solid Leni Bicol, was held less than a day after the May 9 election polls closed and as frontrunner Ferdinand Marcos Jr widened his apparent lead.

Robredo once again assured her supporters that “we feel what you are feeling.”

“We feel the same thing. We want you to know that your worries and anger, we carry that as well,” she said.

She also reiterated what she said in an earlier statement that they will not neglect the reports of irregularities during the elections.

Robredo reminded her supporters to put their sadness, anger, and desperation to good use.

She said that her supporters could either use it for something “that would make us more divided” or they can use it to introduce new changes.

She also said that no matter what the result of the election will be, she hopes that her supporters will accept it.

“While we are all grieving the results of the elections, no matter what the final result is, let us accept it because that will be the source of our strength,” she said, while stressing that no one should forget the irregularities.

“There are bigger fights,” she said.

Various protests in Naga City and in other Bicol towns and cities have sparked since the evening of Monday, election day.

After the mass, some 500 supporters gathered outside the Naga Metropolitan Cathedral to show their indignation towards the results of the elections.

Supporters, even from outside Camarines Sur province, flocked to Naga City to join both the mass and the protest.

Some placards carried by the protesters expressed readiness to join national protests as one said, “Parang sa EDSA papunta ang exciting part (It looks like the exciting part is leading to EDSA),” referencing the cite of the People Power Revolution that ousted Marcos Jr’s family in 1986.

Other placards read, “We will never concede to tyranny,” and, “Tumindig noon, natumba, titindig muli (Stood up before, fell, will stand up again).” 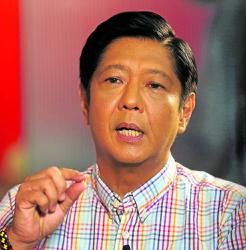