A picture of Philippine Vice-President Leni Robredo is seen as supporters wave their mobile phones and flags during her presidential campaign rally in Pasay City, Philippines on Saturday, April 23, 2022. Presidential hopefuls continue their election campaign with a cast of candidates led by a late dictator's son and the pro-democracy current vice-president as the country is set to vote next month. - AP

MANILA, April 30 (Xinhua): Less than 10 days before the national and local elections held every six years in the Philippines, presidential aspirants are crisscrossing the archipelago, wooing voters with plenty of promises and dancing and singing performances despite the Covid-19 threat.

As the election campaign enters its final days, sloganeering and mudslinging intensify in a desperate effort to destroy their rivals.

The battle has now shifted to drone photography to show which political rally has an enormous number of attendees. Some candidates' children and supporters resort to a house-to-house campaign to personally meet the voters.

Presidential aspirants bring singers and actors to entertain the crowd on the campaign trail. Personalities, not issues, usually dominate campaigns. The candidates rarely or superficially discuss how they plan to deal with ballooning debts or how to revitalize the pandemic-hit economy and stamp out decades-old corruption, widespread poverty, and rising food prices.

Over 65.7 million Filipinos are expected to troop to polling stations on May 9 to elect a new president, a new vice president, 12 of the 24 members of Senate, and members of the House of Representatives. The Commission on Elections (Comelec) data showed that over 18,000 congressional and local positions are up for grabs.

According to the latest opinion surveys, Ferdinand Marcos Jr., 64, son of former President Ferdinand Marcos, is favored to win with majority of the vote in the election over his main rival, incumbent Vice President Maria Leonor Robredo, 57.

Riza, 31, who sells local snacks in a mall in Metro Manila, said she is still weighing which presidential aspirant to vote for in the elections.

"It's a toss between Leni (Robredo) and Bongbong (Marcos)," she told Xinhua, hoping that the upcoming elections will herald a wind of change, such as lowering food prices, amid the lingering threat of COVID-19 and geopolitical uncertainty. She requested to leave out her family name.

The new president, who will lead this Southeast Asian country for the next six years, has a difficult task ahead.

Philippine Statistics Authority data showed that 23.7 percent of the country's nearly 110 million population lives in poverty. The unemployment rate peaked at 17.6 percent in April 2020 amid the Covid-19 pandemic and has fallen to 6.4 percent in February this year, still above the pre-pandemic level of 5.1 percent in 2019.

More people are expected to get jobs as the government eases Covid-19 related restrictions allowing more businesses to resume operations or increase capacity.

Since February, the government allowed fully vaccinated international travelers to enter the country, boosting tourism and employment in the services sectors. Tourism's share of gross domestic product (GDP) fell to 5.4 per cent in 2020 from 12.8 per cent in pre-pandemic 2019. Tourism is a crucial source of jobs, accounting for 13.6 pecans of the country's total employment in 2019.

From 2020 to this January, the Department of Finance said the Philippines had borrowed 1.3 trillion pesos (roughly US$25 billion) to fund the efforts against COVID-19. According to Asian Development Bank (ADB), Philippine government's debt-to-GDP ratio widened to 60.5 percent in 2021 from 54.6 percent in 2020.

Despite the challenges ahead, the recovery of the Philippine economy is forecast to gain traction, fueled by strengthening domestic investment and consumption. The government's GDP target for 2022 is between 7 to 9 percent. The ADB forecasts a 6.0 per cent GDP growth in 2022 and 6.3 per cent in 2023.

In a recent forum, Bangko Sentral ng Pilipinas Governor Benjamin Diokno said that the next administration should prioritize investments in infrastructure, human capital, healthcare, and agriculture to ensure economic stability and continuity. - Xinhua 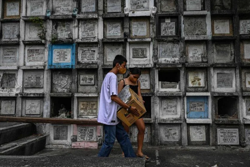