Newbrew, a beer made using Newater, to go on sale in Singapore 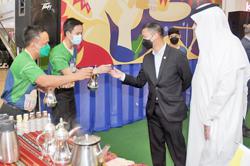 About 95 per cent of Newbrew, a tropical blonde ale, is Newater. - ST

SINGAPORE (The Straits Times/Asia News Network): It looks and tastes like conventional beer, but there is an unusual twist to Newbrew.

About 95 per cent of the tropical blonde ale is Newater - Singapore's brand of clean, high-quality recycled water.

Newbrew was launched on Friday (April 8) by national water agency PUB and local craft beer brewery Brewerkz, in conjunction with Singapore International Water Week (SIWW), a water conference that will be held from April 17 to 21 at Marina Bay Sands.

The new beverage highlights not only that Singapore's recycled water more than adheres to international standards of safe drinking water, but that it is also clean enough to be used in beer brewing.

This process usually requires clean water so as not to contaminate the taste of the malt, hops and strains of yeast, which are carefully controlled by brewers to produce their craft beers.

Said Tan Wee Han, chief executive and owner of Brewerkz, during a media tasting session held at the Newater Visitor Centre in Tanah Merah: "Newbrew is a showcase of the high quality of Newater and is proof that sustainability can be delicious."

Newbrew made its debut in 2018, when it was launched by PUB and Brewerkz to mark the 10th anniversary of SIWW. The beer was served during the conference, although it was not commercially available then.

This year, however, craft beer aficionados will be able to get their hands on the drink, from next Tuesday (April 12) to end-July, at supermarket chains FairPrice and Cold Storage, as well as on online platforms and via Brewerkz's restaurants and e-store.

The beer will be sold in packs of three cans, priced at $4.50 per can.

"There was strong interest from the public and demand for Newbrew to return in the future," said Tan.

"We are delighted to unveil this year's Newbrew just as we are emerging from the pandemic."

Equity trader Jason Ng, 31, said he is game to try Newbrew. “I do not discriminate against beers,” he said.

He added that making the brew available at restaurants would make it easier for people to recognise the novelty of the drink, especially if servers directed their attention to it.

Ng added: “But if I see it in the supermarkets, I’d buy a pack or two to share with friends.”

Newater was introduced by PUB in 2002. Recycling used water is one of the Republic's ways of securing its water security, on top of other measures such as desalinating sea water, importing water and collecting rainwater.

Newater is used mainly by industries requiring ultra-clean water and is also used to top up Singapore's reservoirs.

Ryan Yuen, managing director of SIWW, said: "Newbrew is possibly Singapore's greenest beer and the perfect accompaniment to this year's conference, with its key themes of climate resilience, resource circularity and water sustainability."

He added: "We are delighted to partner Brewerkz to bring Newbrew back again, as it is also part of PUB's efforts to educate Singaporeans on the importance of water recycling and reuse as a strategy to achieve water sustainability."

Newbrew is not the first beer to be brewed using recycled water. Water utilities elsewhere have also collaborated with breweries to roll out similar drafts.

There have been other efforts locally to raise awareness of sustainability issues through alcoholic beverages.

Crust Group, for instance, has rolled out a line of artisanal beers - including flavours such as Kaya Toast Stout and Beerguette - made from surplus bread and other ingredients from its restaurant and hotel partners, to raise awareness on food waste.