Online cockfighting wagers rake in billions in the Philippines

Roosters fight inside a pit during a match live streamed at the Pitmasters Live compound in Lipa City, Batangas, the Philippines, on Saturday, Jan. 29, 2022. Cockfighting, in which two roosters spar to the death, has become an online craze in the Philippines. - Bloomberg

A referee shadowed the animals as they tore out feathers, pounded air and nipped at vulnerable parts of the neck. Less than a minute later, the match was over and a winner declared. The victor squawked over the body of the defeated.

Cockfighting, in which two roosters spar to the death, has become an online craze in the Philippines. Once a declining bloodsport, the centuries-old game is now a major industry across this Southeast Asian nation, pulling in millions of dollars in bets a day and attracting a new generation of gamblers.

Its resurgence in the Philippines, the only country in the world that accepts online bets for game fowl, has shaken traditional players on the casino floor.

Matches are drawing in more monthly revenue than the local ventures of gambling behemoths Melco Resorts & Entertainment Ltd. and Genting Hong Kong Ltd. Investors are taking notes, with countries from Mexico to Papua New Guinea mulling forays into online betting, according to people in the industry.

A taboo in much of the West, cockfighting holds no such stigma in the Philippines, where fights can attract crowds on par with US baseball games or British rugby matches. Cashing in on a surge in popularity, Resorts World Manila, which is owned by tycoon Andrew Tan, opened a betting station in its casino. Two other resort developers are expected to do the same.

At the centre of the phenomenon is Charlie "Atong” Ang, a freewheeling fitness buff and the brain behind Pitmasters Live, the top-shelf brand of online cockfighting. His group streams matches round-the-clock, averaging around 350 a day and partnering with breeders across the country. Digital payment platforms and hundreds of agents facilitate access to the Pitmasters webcast, take wagers and disburse winnings.

With minimum bets set at less than $2, online cockfighting is affordable and instantaneous, a sellable diversion for the country’s video game generation. But the industry’s rapid rise is also the story of ruined lives and addiction, of a tug-of-war with regulators and backlash from international animal rights groups.

A senior church official from the Catholic Bishops’ Conference of the Philippines called online cockfighting "one of the most disastrous things ever allowed by the government.” Lawmakers are investigating the disappearance of more than two dozen gamblers, prompting some to propose suspending the sport until cases are solved.

Ang waved off criticism. In the rough-and-tumble world of cockfighting, he said, bets should only be placed with "your laughing money.”

"Anything that’s more than what we need is addiction - be it food or money,” he said. "Let’s not be hypocrites.” 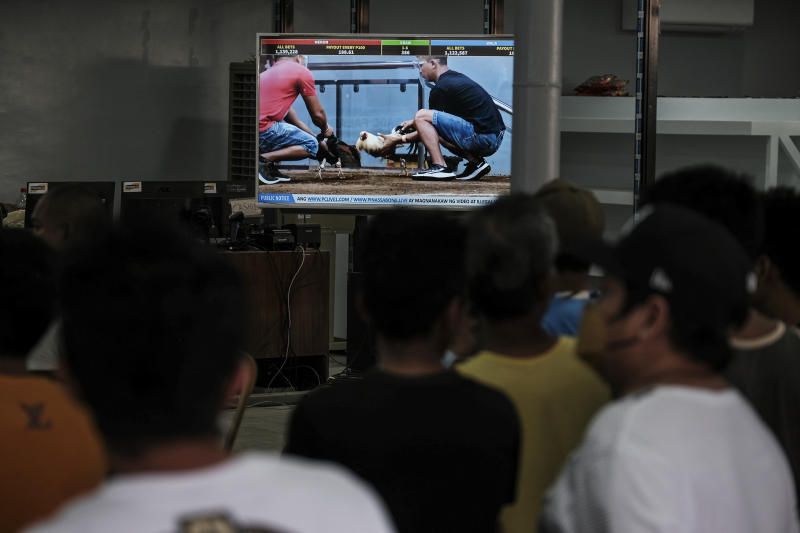 Cockfighting enthusiasts watch a match on a screen at the Pitmasters Live compound in Lipa City, Batangas, the Philippines, on Saturday, Jan. 29, 2022. - Bloomberg

The ‘NBA’ of Cockfighting

Cockfighting has an expansive history in the Philippines, predating the exploits of Ferdinand Magellan, the Portuguese explorer who landed on the shores of this island nation more than five hundred years ago.

Though illegal in most of the world, sabong, as the game is known locally, has a devoted following in the Philippines. Every year, scores of people gather to watch the World Slasher Cup, a multi-day series of matches held in a coliseum in metro Manila.

The event has all the corporate trappings of a modern sports tournament, complete with giant inflatable roosters and a soundtrack that tends to favor "Eye of the Tiger.”

In recent years, the game has waned in popularity. Government rules limit fights with in-person spectators to Sundays and holidays. Cockpits raised entry costs for bettors. When Covid lockdowns shuttered businesses, the country’s most ambitious gaming operators, who had already started streaming matches, sensed an opportunity: Why not digitize many more of them?

"Online cockfighting wouldn't be this big were it not for the pandemic and the game’s accessibility through mobile phones,” said Claire Alviar, an analyst at Philstocks Financial Inc. in the Philippines.

The sport’s spike in popularity is really the rise of Pitmasters, which has a near-monopoly on the business model. According to data from Ang, the group generates more than 700 billion pesos (US$13.4 billion) annually in wagers. That figure is more than double the estimated gross gaming revenue of the country’s casinos in 2019, based on figures provided by the Philippine Amusement & Gaming Corp.

"We are the superstar of sabong. We are the NBA of this sport,” he said, likening his brand to the U.S. National Basketball Association.

The purported profits are staggering. The platform collects an average of 2 billion pesos to 3 billion pesos each day, according to Ang. Of that amount, 95% goes to bettors as winnings and the remaining 5% to Pitmasters and its agents as commission. Another 135 million pesos is paid as a monthly tax to the state-run gaming regulator, which has used funds to fight the pandemic.

Ang, 63, said his group’s revenue each month is 1.5 billion pesos, a huge sum considering Bloomberry Resorts Corp., which operates one of the country’s biggest casinos, pulled in profits of about 10 billion pesos in 2019.

Within weeks of starting his job in Aug. 2020, one said he was earning at least 3 million pesos a month, or nearly $60,000 - more than enough to buy a new car and house. After technology giant Globe Telecom Inc. started facilitating bets and linking games to its platform, cutting out the need for middlemen, his pay fell to a more modest $2,300.

"It was easy to sell online sabong,” said the agent, who uses the alias Edwin Cruz. "The pandemic provided great timing because many Filipinos are gamblers and they were stuck at home getting bored.” 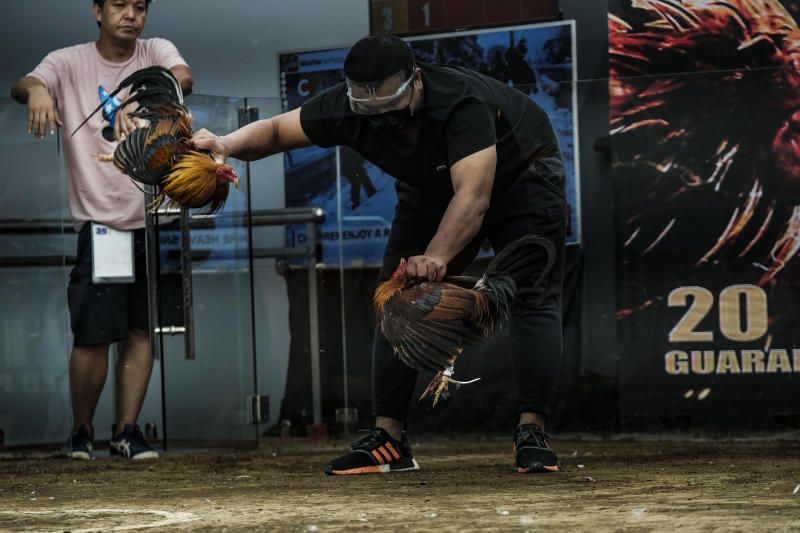 A staff member holds roosters inside a pit during a match live streamed at the Pitmasters Live compound in Lipa City, Batangas, the Philippines, on Saturday, Jan. 29, 2022. - Bloomberg

Ang has spent practically his entire life in the business. As a teenager, he frequented cockpits and casinos. During the reign of former president Joseph Estrada, he worked as a consultant for the government’s gaming regulator.

His reputation is checkered. In 2001, Estrada was ousted from office after evidence surfaced that Ang had helped him divert 130 million pesos in tobacco taxes. With pressure building, Ang fled to the U.S., where he was caught gambling in Las Vegas and placed under house arrest. In 2006, he was extradited to the Philippines and later pleaded guilty to a corruption charge.

After serving time in jail, Ang sought to reinvent himself. In 2019, he drafted his business plan, drawing inspiration from off-track betting for racehorses and the success of online casinos. He studied laws governing cockfighting and convinced the city of Manila to allow him to set up offsite betting stations.

When the pandemic shut down the world, Ang pounced. He started streaming matches with the blessing of the government. Globe Telecom’s GCash and later PLDT Inc.’s Paymaya joined to process payments. Last September, the House of Representatives approved a 25-year franchise application for Pitmasters. Its fate now rests with the senate.

"There’s a lot of room for expansion,” Ang said, estimating that his 900 betting stations cover only 20% of the Philippine archipelago. A breeder holds a rooster before a match at the Pitmasters Live compound in Lipa City, Batangas, the Philippines, on Saturday, Jan. 29, 2022. - Bloomberg

In the coastal town of Hagonoy, a man stabbed to death his 87-year-old neighbor after he refused to lend him money. At a press conference, Senator Panfilo Lacson recounted the story of a gambler who killed himself after accumulating debt totaling 600,000 pesos.

In response to the disappearance of a few dozen people last seen at cockfighting arenas, the senate recently summoned Ang for questioning. In January, at a Pitmasters cockpit in Manila, a grenade was found. "We have nothing to do with these incidents,” Ang said.

As investigators probe further, the industry’s future is unclear. Ahead of presidential elections in May, Leni Robredo, one of the leading candidates, said she’s generally not in favor of gambling. The frontrunner, Ferdinand Marcos Jr., has yet to publicly comment on the issue.

Then there are the animal rights advocates who find the sport unconscionable. To amp roosters for a fight, breeders sometimes slip cayenne pepper into their anuses. Jason Baker, a senior vice president at the People for the Ethical Treatment of Animals, or PETA, lamented the rise of e-sabong.

"Moving this cruel and unethical practice online is a desperate move by a dying industry,” he wrote in an email. "Birds are mutilated, injected with steroids, and forced to fight until their unnecessary death.”

To this, Ang scoffed. His company has given more than 800 million pesos to charity. Not only is the sport honorable, he said, but it is here to stay.

"Among the games you can bet on, cockfighting’s 50-50 odds of winning is the best there is,” Ang said. "They say gambling is bad, but why are casinos, liquor and cigarettes legal? It’s because they’re paying taxes.” - Bloomberg