SINGAPORE (The Straits Times/Asia News Network): A freelance instructor, engaged on a contract basis to teach dance to children, molested two boys on separate occasions at their primary schools.

The 42-year-old Singaporean man was on Thursday (Jan 27) sentenced to three years and 10 months' jail with six strokes of the cane after he pleaded guilty to three molestation charges.

He cannot be named owing to a gag order to protect the children's identities.

Some time in mid-2016, the first victim, who was about nine or 10 years old at the time, was preparing for a dance performance at his school when the man came over to adjust the child's costume.

The man then molested the boy who froze in fear and did not resist.

The pupils, two teachers and the man later went to the dance room of the school after the performance for debriefing.

By then, the victim had changed out of his costume into his physical education attire.

"The skin-to-skin contact lasted about 15 to 20 seconds. The first victim was again shocked by the accused's touch and froze in fear."

The boy was traumatised by what had happened but did not know how to broach the issue with adults.

He attended a sexual education class in late August 2020. After doing so, the boy decided to tell a teacher and his mother about the "inappropriate touches". He alerted the police the following month, the court heard.

Meanwhile, the court heard that the man was at another primary school in November 2019 when he molested his second victim - a 10-year-old boy.

In February 2020, the pupils from the dance group, their teachers and the man were in a bus travelling from the school to a performance venue when he molested the boy again.

The second victim attended sexual education classes eight months later before he told his teacher about his ordeal.

The matter was escalated to the school management and a police report was made soon after.

In an earlier statement to The Straits Times, the Ministry of Education (MOE) said that the man has since been deregistered from its registry of instructors and is no longer engaged by any school.

Its spokesman said: "MOE is committed to providing a safe learning environment for students.

"MOE takes a serious view of instructors whose conduct compromises the safety and well-being of our students and will not hesitate to take firm action against them, including immediate termination of their services and permanent debarment from providing their services in schools."

The man's bail was set at $8,000 on Thursday and he was ordered to surrender himself at the State Courts on Feb 3 to begin serving his sentence.

For each count of molesting a child below 14, an offender can be jailed for up to five years and fined or caned. 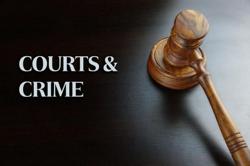