Philippine presidential front-runner Ferdinand "Bongbong" Marcos Jr said he will not side with any superpower, and will create his own foreign policy. - Reuters

MANILA, Jan 25 (Bloomberg): Philippine presidential front-runner Ferdinand "Bongbong” Marcos Jr. said he plans to negotiate a deal with China to resolve the territorial dispute in the South China Sea if he wins this year’s elections, while fostering ties with the US and Russia.

Marcos said the arbitration case which the Philippines won against China was "not effective,” and that a bilateral agreement with Beijing is the "only practical option.”

Asean can also help resolve the sea row, he said in a DZRH radio interview on Tuesday.

The late dictator’s son said he will not side with any superpower, and will create his own foreign policy.

Marcos’s stance is similar to that of President Rodrigo Duterte, who has warmed ties with China, while maintaining the Southeast Asian nation’s alliance with the U.S.

The Philippines has repeatedly filed diplomatic protests against China for its presence in disputed waters. - Bloomberg 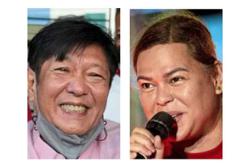