Two prominent political activists in military-ruled Myanmar have been sentenced to death for alleged involvement in terrorist activities, an army television station reported. 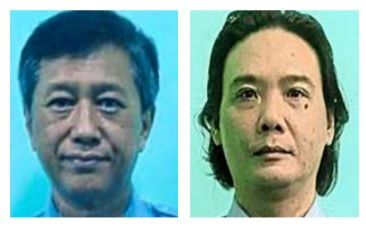 Harsh sentence: Min Yu and Zeyar Thaw have been given the death sentence. — AFP

They were found guilty of offences involving explosives, bombings and financing terrorism.

Details of their trials were unavailable because the proceedings were carried out in a closed military court. It was unclear if their two cases were linked.

Modern-day Myanmar has a record of rarely carrying out death sentences.

The two are among the most prominent activists to be given death sentences since the military in February last year seized power from the elected government of Aung San Suu Kyi.

Its takeover sparked wide-scale popular protests, which have since turned into a low-level insurgency after nonviolent demonstrations were met with deadly force by the security forces. Almost 1,500 civilians are estimated to have been killed, and more than 11,000 arrest carried out for political offenses.

Min Yu is one of the leaders of the 88 Generation Students Group, veterans of the popular uprising that failed to unseat a previous military government.

He has been active politically ever since then and has spent over a dozen years behind bars. His Oct 23 arrest was originally reported by his wife, an activist who had also been jailed in the past.

Two weeks after his arrest, a statement from the military-installed government accused Min Yu of “conducting terrorism acts, including mine attacks to undermine the state stability” and alleged that he headed a group called “Moon Light Operation” to carry out attacks.

He had already been on the wanted list for social media postings that allegedly incited unrest.

Zeyar Thaw is a former lawmaker with Suu Kyi’s National League for Democracy party. He was a hip-hop musician before becoming a member of Generation Wave, a political movement formed in 2007.

He was arrested on Nov 18 in possession of weapons and ammunition, according to a statement at the time from the ruling military.

It said he was arrested based on information from people arrested a day earlier for carrying out the shootings of security personnel. — AP