A signboard for TotalEnergies EP Myanmar is seen past a shuttered gate in Yangon on January 22, 2022, after energy giants TotalEnergies and Chevron said they would leave Myanmar following pressure from human rights groups to cut financial ties with the junta since last year's military coup.- AFP

BANGKOK, Jan 22, 2022 (AFP): The exit of energy titans TotalEnergies and Chevron from Myanmar's billion dollar gas industry has been hailed by rights groups, but analysts say it will not significantly weaken the generals and may even enrich the military in the short term.

Both firms had faced pressure to cut financial links with the junta that toppled Aung San Suu Kyi's government last year and has since killed more than 1,400 people in a crackdown on dissent, according to a monitoring group.

The French firm and US oil major Chevron will withdraw from the Yadana gas field in the Andaman Sea, which provides electricity to the local Burmese and Thai population.

"But there is a lot more pressure needed to defeat this junta for good.

"Governments no longer have an excuse to delay imposing targeted sanctions on oil and gas entities... to prevent any other unscrupulous entities from entering the market."

TotalEnergies and Chevron's departure will deprive the junta of hundreds of millions of dollars a year in foreign revenue as the economy it presides over tanks from months of unrest and a mass walkout.

TotalEnergies alone paid around $176 million to Myanmar authorities in 2020 in the form of taxes and "production rights", according to the company's own financial statements.

Naw Susanna Hla Hla Soe, a minister in a shadow government dominated by lawmakers from Suu Kyi's party which is working to topple the military said the news sent a "very strong message" to the junta.

"Other companies must follow Total's example to put even more pressure on the generals," she added.

If the French and American titans were willing -- belatedly -- to bow to rights groups and activist pressure, there are others with fewer qualms about making money in junta-run Myanmar.

"It will be harder to force the hand of Asian investors because their human rights commitments and the stakeholder pressures on them are lower," Dr Htwe Htwe Thein at Curtin University in Australia, told AFP.

Others say it is possible the junta will profit short-term from any change in ownership.

The withdrawal of TotalEnergies is "a big vote of no confidence in the regime", International Crisis Group's Myanmar senior advisor Richard Horsey told AFP.

But the junta would likely be able to "sell the departing operators' stakes", he added -- which would inject much needed hard currency into the state coffers.

The military would also be able to "attract and negotiate favourable terms and signature payments from operators in jurisdictions beyond the scope of Western sanctions".

TotalEnergies will not exit immediately -- it said in a statement it will continue to operate the site for the next six months at the latest until its contractual period ends.

"As things stand... Means likely cash windfall for the regime unless ways are found to prevent that, which must be priority," Horsey said on Twitter.

And the generals' economic portfolio stretches far beyond gas, and includes interests in mines, banks, agriculture and tourism, providing the military with a colossal -- and closely guarded -- fortune.

The jade industry alone -- dominated by military-owned business -- provides the military with billions of dollars a year in off-the-books revenue, analysts say.

There also remains the question of how easy TotalEnergies and Chevron will find it to exit junta-ruled Myanmar, said Htwe Htwe Thein, citing Norway's Telenor, which announced it was withdrawing in July, but whose exit has been held up by the military.

"Total may suffer the same fate," she said. - AFP 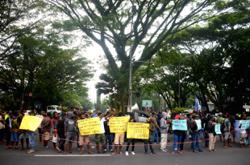