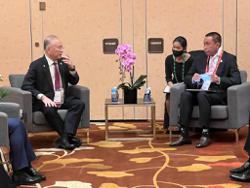 China will extend its high-speed rail network nearly 32 per cent by 2025, roughly equal to the combined length of the next five largest countries by network size, amid an emerging consensus that Beijing is again leaning on infrastructure investment to curb an economic slowdown.

The country also plans to widen use of its Beidou satellite navigation system at home and abroad, while tightening control of transport data, as technological self-reliance and national security have become government work priorities.

China, which has the world’s largest high-speed railway network, will expand its length to 50,000km by 2025, 12,000km longer than the end of 2020, according to the new five-year transport plan issued on Tuesday by the State Council, the country’s cabinet.

The increase exceeds the combined length of high-speed rail networks in Spain, Japan, France, Germany and Finland last year, which was 11,954km, according to data from the International Union of Railways, an international rail transport industry body headquartered in Paris.

Is there a dark side to China’s high-speed rail network?

“There are obvious shortcomings in intercity and urban railways in key city clusters and metropolitan areas,” it read.

Amid growing economic headwinds, Beijing has pledged to “front load” infrastructure construction to shore up growth this year.

According to analysts, weakening infrastructure and property investment were major contributors to China’s economic slowdown in the second half of last year.

The key to stabilising growth this year is steady investment, especially in infrastructure and property, Liu Shijin, deputy director of the Economic Affairs Committee at the Chinese People’s Political Consultative Conference, said at a virtual forum on Monday.

Lu Ting, chief China economist of Nomura, said in a note on Wednesday Beijing is likely to speed up investment in infrastructure projects, though “the size is unlikely to be sufficient to stabilise growth”.

In another guideline issued last February, China said it would nearly double the size of its high-speed railway by 2035 and increase the entire network to 200,000km by 2035.

The new five-year plan said China aims to have full coverage under its Beidou system in key areas of domestic transport, while steadily promoting its application in global maritime shipping and road transport.

The document also urged stronger standardisation in collection, processing and use of transport data, while preventing “disorderly expansion” of ride-hailing, an issue authorities are taking more seriously after a cybersecurity review was launched into Didi Chuxing last year.

“The independent innovation of some core products and technologies is not strong. The transport security situation is still serious,” the plan said.