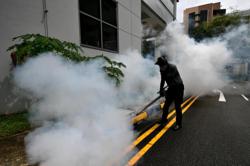 Nine out of 10 people in Singapore have now completed the basic vaccination regimen and half the population have received their booster shots. - The Straits Times/ANN

SINGAPORE, Jan 16 (The Straits Times/ANN): Will Singapore's Omicron wave be shaped like a plateau, with a flat top? Or will it look more like a mountain, with steep slopes and a sharp peak?

"I would anticipate that we will see a fairly sharp peak, like what South Africa has had, and it will decay after that," he told The Sunday Times last week. "It will only be after that point that we get to a stable number, with lower numbers of infections."

Just how steep the slopes of the next wave are will depend on the restrictions Singapore has in place.

"It could be that we have a lower, longer, slower burn, and we maintain the measures that we currently have in place," said Prof Cook, vice-dean of research at the Saw Swee Hock School.

"That would be better for the healthcare system, but it's probably harder for us as individuals because we want to get it over and done with."

The Omicron variant has spread like wildfire all over the world since it was first detected in South Africa last November, with Australia, Britain, South Korea and the United States all feeling its impact.

But the silver lining is that infections generally seem milder, with fewer hospitalisations and deaths reported despite soaring case numbers.

In Singapore, the variant is spreading much more slowly than it is in European and North American cities because of the country's safe management measures, said Professor Teo Yik Ying, dean of the Saw Swee Hock School.

He added: "Certainly, the Omicron variant has the potential to spread very quickly, especially in the absence of community measures and mask wearing, such as what we have seen overseas."

The number of Covid-19 cases here has been steadily climbing in recent weeks, with Omicron making up a growing proportion of each day's new infections.

Singapore recorded 832 new cases of the Omicron variant on Friday, up from 549 a day earlier.

These numbers mean that Singapore will soon face an Omicron wave, with 10,000 to 15,000 cases a day a distinct possibility.

But apart from the new variant being less severe than Delta, the country's circumstances are also very different from when Delta first hit.

On April 1 last year - the date of Singapore's first Delta case as stated by global information sharing database Gisaid - the country was still pursuing a zero-Covid-19 policy instead of treating the virus as endemic.

Fewer than one million people were fully vaccinated at the time, with daily case numbers in the double-digits and the vast majority of infections imported. Air travel had slowed to a trickle and quarantine-free travel was not an option.

The Delta wave eventually peaked in October, with the country seeing on average 3,000 new cases daily.

For one thing, it has begun treating the virus as endemic.

The country has embarked on vaccinated travel lane arrangements allowing for quarantine-free travel, although ticket sales have been temporarily curbed to buy the country time to gear up for the next wave of infections.

Importantly, nine out of 10 people - or nearly five million people - have now completed the basic vaccination regimen and half the population have received their booster shots.

These shots will help protect individuals and the community, said Assistant Professor Hannah Clapham, also from the Saw Swee Hock School. "But even with boosters, the transmissibility of Omicron means we should still expect to see a substantial number of cases."

However, Prof Cook said that once Singapore is confident that Omicron will not overwhelm the healthcare system and nears completion of its nationwide booster roll-out, it should push forward with reopening.

"Once we're confident enough about our ability to 'tahan' Omicron, we should be bold with reopening," he added, using a Malay word meaning "to withstand".

Yet even as it does so, the country must stand ready to do battle again.

Associate Professor Luo Dahai from the Lee Kong Chian School of Medicine said that new variants are always evolving and spreading as a universal vaccine is not available.

"As it is said, no one is safe until everyone is safe," said Prof Luo, whose research focuses on infection and immunity. "We must always be prepared to face waves of Covid-19 outbreaks." - The Straits Times/ANN 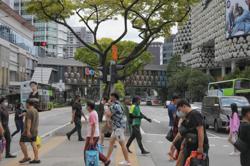