Fourth round of Covid-19 vaccinations starts

Extra protection: An elderly woman waiting to receive a fourth dose of vaccine at a health centre in Phnom Penh, Cambodia. — AP

THE country began a fourth round of vaccinations against the coronavirus in response to the Omicron variant, with high-risk groups being among the first to receive the additional boosters.

Frontline medical staff and members of the armed forces were among those lining up at hospitals and clinics.

Hun Sen has appealed to all Cambodian people to get fully vaccinated, including a booster, saying on his Facebook page that it is the only way to make sure to keep their families and communities safe from Covid-19.

A campaign to have people get their third jabs is still ongoing.

The country’s first case of the highly transmissible Omicron variant was confirmed in mid-December in a 23-year-old woman who returned from Ghana.

Cambodia reopened its borders to fully vaccinated travellers on Nov 15, two weeks earlier than originally planned, in a move aimed at revitalising the country’s economic and social activity.

Cambodia’s vaccination drive started slowly but ramped up quickly. Children aged five and older have been included in the programme since the beginning of November.

Restrictions on domestic tourism, schools and other sectors were also lifted at the start of the month. 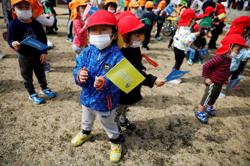