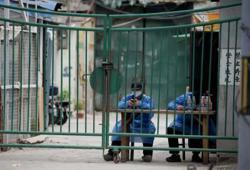 Beijing will send anti-riot equipment and an ad hoc police advisory team to the Solomon Islands to help defuse the civil unrest that started last month and has been blamed in part on discontent with China.

Chinese foreign ministry spokesman Zhao Lijian said on Thursday the equipment and personnel were offered at Solomons’ request and would “soon arrive” to enhance the ability of its police.

“China firmly supports the government of Solomon Islands in defending the country’s stability and resolutely safeguards the relations between China and Solomon Islands,” he told reporters.

The unrest in the Solomons, with a population of about 680,000, broke out in late November when Prime Minister Manasseh Sogavare was accused of using money from a national development fund that comes from China. Sogavare has rejected allegations of corruption.

China and the Solomon Islands established official bilateral relations when the Solomons switched its allegiance to Beijing from Taiwan in September 2019.

The Pacific nation said in a statement on Thursday that its government “is mindful of the urgent need to strengthen Royal Solomon Islands Police Force capability and capacity to respond to future unrest”.

It said it agreed to accept China’s offer of riot equipment and six police liaison officers to equip and train the police force “with the skill sets complimenting ongoing training received under existing bilateral assistance”.

China is sending shields, helmets, batons and other non-lethal gear “that will further enhance Solomon Islands police ability in confronting future threats,” according to the Solomons government statement.

US warns Pacific Islands against aid that benefits ‘one bank account’

Last week, Chinese Foreign Minister Wang Yi accused “forces with ulterior motives” of inciting riots in the island nation. He said China was confident in the future of its bilateral relations and would support the Solomons to restore order, rebuild and reach stable development.

The riots have raised the alarm about how Pacific nations are reacting to Beijing’s efforts to poach the few remaining diplomatic allies of Taiwan, a self-ruled island which China sees as a breakaway province.

In the protests that broke out on November 24, dozens of buildings were burnt down and shops looted in the Chinatown neighbourhood of Honiara, the Solomons’ capital.

There have been strong voices of opposition accusing Sogavare of taking money from the country’s National Development Fund which has been backed by Beijing since the diplomatic switch took place under Sogavare.

Sogavare has blamed foreign powers that opposed his 2019 decision to switch diplomatic recognition from Taipei to Beijing for influencing anti-government protesters from Malaita province.

Observers attribute the violence to a combination of factors, including lingering resentment about Beijing’s influence in local politics and the economy, particularly in Malaita province, discontent over corruption, unemployment and informal settlements, or slums.