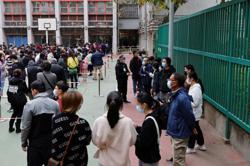 The move comes as regulators around the world give the green light to treatments -- particularly for high-risk groups -- amid worries over the new Omicron variant.

China is also grappling with a growing number of studies that show its vaccines have lower efficacy rates than many of those made overseas.

A monoclonal antibody is a type of protein that attaches to the spike protein of the coronavirus, reducing its ability to enter the body's cells.

The treatment involves a combination of two drugs, administered through injections, and can be used to treat certain cases that are at risk of progressing in severity, the drug authority said.

It was co-developed by Tsinghua University, the Third People's Hospital of Shenzhen and Brii Biosciences.

Trial data showed that the combination therapy could reduce the risk of hospitalisation and death in high-risk patients by around 80 percent, Tsinghua University said in a statement on social media late Wednesday.

A state media report last month added that the treatment has also been used on patients infected in local flare-ups.

EU health authorities have approved pills for emergency use too -- involving antiviral medications that slow down illness by reducing the virus's capacity to reproduce within the body.

While pills are easier to use, the most effective treatment for Covid currently involves monoclonal antibodies, which are administered via a drip.

China has several conditionally approved vaccines as well, but their published efficacy rates lag behind rival jabs developed in other countries.

A study by Hong Kong's Chinese University published last month found people inoculated with the BioNTech vaccine had significantly higher antibody levels than China's Sinovac, adding to two other studies in Hong Kong and the mainland that produced similar data.

The study did find the T-cell response -- white blood cells that remember how to fight disease -- remained strong in Sinovac patients.

Hong Kong has begun calling for residents who were vaccinated with Sinovac to take a third booster to up their protection levels. - AFP