SINGAPORE (The Straits Times/Asia News Network): Singapore "remains deeply concerned about recent developments in Myanmar", a spokesman for the Ministry of Foreign Affairs (MFA) said on Tuesday (Dec 7), in response to media queries over recent events.

The Republic is also "disappointed by the lack of tangible progress in the implementation of the Asean Five-Point Consensus", the MFA said in a statement.

Both later had their sentences halved by junta chief Min Aung Hlaing.

Separately, the United Nations on Monday called for Myanmar to hold to account anyone using excessive force against unarmed civilians after security forces rammed a car into anti-coup protesters killing five of them, according to media and witnesses.

MFA in its statement said: "We reiterate our call for the cessation of violence, constructive dialogue among all parties, and urge the Myanmar military authorities to cooperate with the Asean Chair's Special Envoy on Myanmar to swiftly and fully implement the Five-Point Consensus, including by facilitating the Special Envoy's visit to Myanmar to meet with all parties concerned."

Singapore also calls for the release of all political detainees including Ms Suu Kyi, U Win Myint and foreign detainees, MFA said, and for the Myanmar military authorities to avoid actions that would be detrimental to eventual national reconciliation and restoration of peace and stability in Myanmar.

Asean's seven-month-old road map to tackle the Myanmar crisis has made little ground.

This "Five-Point Consensus" calls for a cessation of political violence, the provision of humanitarian aid and the appointment of an Asean special envoy who would then meet all parties concerned to try to foster inclusive political dialogue in Myanmar.

While some aid from the regional grouping to the troubled member has been dispatched, Asean's special envoy Erywan Yusof has not travelled to the country since his appointment because the junta has rebuffed his request to meet ousted State Counsellor Aung San Suu Kyi. 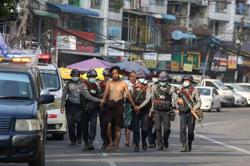