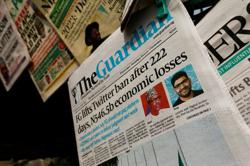 SINGAPORE (The Straits Times/Asia News Network): Two Nigerian men who were members of a transnational love scam based in Malaysia got into relationships with Singaporean women who then acted as their money mules.

The other Nigerian, Awolola Gbolahan Ayobami, now 40, recruited Norhafiza Samsudin, who also bore him a child.

Court documents do not disclose if the two men are related to each other. They committed their offences from 2017 to 2019.

On Tuesday (Dec 7), Opeyemi was sentenced in a Singapore district court to five years' jail after he pleaded guilty to three counts of abetting with others to receive the benefits of criminal conduct linked to more than $550,000 in losses.

Ayobami, who admitted to two counts of abetting with others to receive the benefits of criminal conduct linked to $150,000 in losses, was ordered to spend four years and two months behind bars.

Each man also pleaded guilty to one count of being part of a conspiracy to obstruct the course of justice. The cases involving the three women are still pending.

Instead, they went on to play integral roles in helping the syndicate with its criminal activities.

The two Nigerians worked with a scammer known only as "Fola", who would cheat the victims.

Opeyemi and Ayobami would then recruit money mules to assist in receiving the monies from the victims.

Arrangements would then be made for the money mules to hand over the ill-gotten gains to the pair in Malaysia.

The prosecutor said that the men did not enter Singapore during the course of the offences.

He told Deputy Presiding Judge S. Jennifer Marie that the ruse involved the scammer getting to know the victims using false personas on the Internet.

"The victims, trusting the scammer, would then make bank transfers or hand cash over in accordance with instructions from the scammer."

Opeyemi got to know Suhaili in 2016. She then allowed him to use one of her bank accounts to receive cash on his behalf.

It was later frozen after the authorities here received reports from love scam victims. In 2017, he asked her to open other bank accounts and she complied.

Between June and October that year, two accounts received more than $450,000 in cash from multiple scam victims from Singapore, Canada and Macau.

The prosecutor said that Suhaili would withdraw the monies from the accounts from time to time before travelling to Malaysia to hand them over to Opeyemi.

The court heard that in 2018, Suhaili was handed ill-gotten gains totalling more than $100,000 and she later travelled to Malaysia to hand over the monies to him.

Ayobami committed his offences in a similar manner.

The prosecutor said that in 2018 and 2019, a woman was duped into handing over $85,000 to Norhafiza, who was unable to leave Singapore as the police had impounded her passport.

She then told her son to travel to Malaysia and hand the monies to Ayobami. Her son complied and made two trips there.

According to court documents, when he later refused to make such trips, Ayobami asked Norhafiza to pass the monies to another money mule and she complied.

In an earlier statement, the police said they conducted a joint investigation with their Malaysian counterparts and established the two Nigerians' identities.

In an operation on April 16, 2019, the Malaysian police arrested Opeyemi and Ayobami in Kuala Lumpur.

The men were taken to Singapore on May 13 that year and charged in court the next day.