A BABY elephant is recovering following lifesaving treatment after being shot several times and caught in a hunter’s trap.

The elephant, whom rescuers have named “Fahsai”, meaning “clear sky”, was found by passers-by in eastern Thailand on Sunday with her right foot caught in a trap and gunshot wounds to her shoulder.

“We managed to extract a large fragment of a bullet, followed by two smaller pieces,” said veterinarian Padet Siridumrong.

Fahsai’s wounds will have to be tended to daily until she is strong enough to undergo surgery to extract the remaining bullet fragments.

The three-month-old animal will be given milk from other mother elephants at the Nong Nooch Tropical Garden in Chonburi province before a foster-mother elephant is found to adopt her. — Reuters 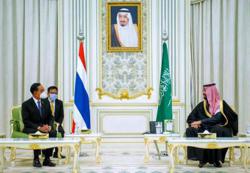